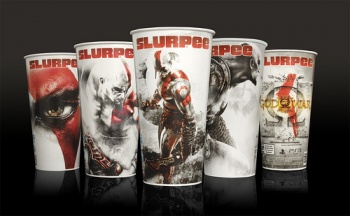 When Kratos needs a pick-me-up, he heads over to his local 7-Eleven for a Kratos-flavored Slurpee and a Big Bite.

Starting tomorrow, 7-Eleven will begin to sell an exclusive new flavor of Slurpee called "Kratos Fury." That name isn't a coincidence, the new flavor is part of a God of War III marketing campaign that will also include a host of Slurpee cups based on the game.

Kratos Fury is a blend of blackberry and lime formulated by Sony and Mountain Dew, which sounds delicious. If only I didn't think Slurpees were a slurry unworthy of my consumption, I'd be more excited about this. Lime and blackberry are much better tasting than blood and rage, which is how fellow Escapist writer Logan Westbrook feels a Kratos Slurpee should taste.

Too bad for me, I don't like Mountain Dew either, so I guess I have to miss out on all the fun. I do love myself a good hot dog cooked on a roller machine though. Pop one in a Pandora's Box, and you've got yourself a Dog of War. Make it happen, 7-Eleven.