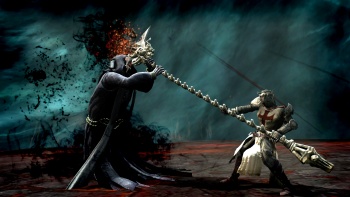 Electronic Arts announced that it will be telling watchers of the Super Bowl on Feb. 7th to "Go To Hell" with a 30-second spot for Dante's Inferno. EA has conducted an atypical campaign for the action adventure game loosely based on the epic poem by Dante Alighieri. The media stunts included a fake protest at E3, a bogus website toting a game called Mass: We Pray and even rick-rolling The Escapist's own Yahtzee Croshaw with a box designed to play that fateful song until he bashed it to smithereens. The blitz will hopefully come to end when the game is finally released on Feb. 9th, a mere two days after the Super Bowl ad, called "Hell Awaits," airs during the fourth quarter of the game.

EA is attempting to cash in on the popularity of football in America with the coveted 18-35 male demographic.

"Even within the spectrum of live sports events, the Super Bowl stands apart, almost as a national holiday," said EA president Frank Gibeau, in a release. "The Super Bowl is a bull's-eye in terms of cross-over to our core demographic and the reach is outstanding. Not only does it draw 100 million viewers, but most people watch the Super Bowl live, a rarity in the world of DVRs. We felt that advertising during the Super Bowl is an excellent way to introduce this new IP to a massive cross-section of people who are likely already familiar with the dark and twisted Divine Comedy."

I'm with you there all the way, Frank. The Super Bowl is the perfect place to grab people who know all about 14th century Italian literature.

Update: Apparently, EA was not allowed to use their tagline for the game, "Go To Hell," for the Super Bowl ad, as it was deemed too offensive for U.S. audiences.

"It was deemed too provocative," Paulo Ribeiro, account director for EA at the Wieden ad agency. "The final verdict has yet to be rendered, but it is unlikely that we will get [it on the game.]"

You've got to love America. All it takes is a tit to fall out during the halftime show and the people running the Super Bowl spend the next ten years making sure that they don't offend anyone. Hell awaits, indeed.