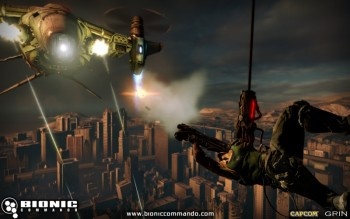 Following the dismal sales failure of last year's Bionic Commando, Capcom says it will handle the development of new games primarily in Japan, while Western studios will only work on existing, well-established properties.

Developed by Swedish studio Grin, which closed down in August of last year, Bionic Commando earned respectable reviews but tanked at the register, moving only 27,000 copies in its first month of sales across both the Xbox 360 and PlayStation 3. That failure has apparently led Capcom to take a second look at how it makes use of Western developers and how much responsibility they'll be given in the future.

"We are considering ways to separate the roles of activities in Japan and overseas," the company said during a Q&A session with analysts. "We plan to develop new titles primarily in Japan."

Western studios like Grin, meanwhile, will be relegated to working on existing properties "with well-established characters and universal themes," it continued. "Overseas companies will also handle certain parts and/or lineups of such games."

Capcom sounded like it would prefer to avoid dealing with Western developers altogether, if it could. Unfortunately, at this point they appear to be a necessary evil. "We cannot develop a sufficient number of titles without using the resources of these companies," it said. "This is why we plan to continue using these alliances."

Of course, as Gamasutra notes, Bionic Commando actually was an established brand prior to Grin's involvement: It was originally released as an arcade machine in 1987 before being brought to the NES a year later and then the Game Boy in 1992. The most recent addition to the franchise prior to Grin's involvement was Bionic Commando: Elite Forces for the Game Boy Color in 1999, so the series wasn't exactly at the forefront of mainstream gamer consciousness; on the other hand, Grin also developed the far-better-received Bionic Commando Rearmed, the 2008 remake of the NES classic. Maybe there's a simple truth being overlooked here: Good games, and bad, can come from anywhere.