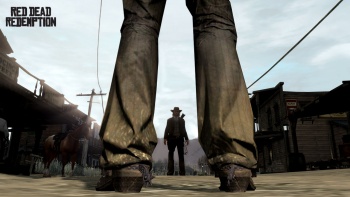 There may be a scientific explanation for why the good cowboy will always defeat the bad cowboy in a duel.

We've all seen it a million times: a good cowboy is forced into a duel with a bad cowboy, the bad cowboy draws first, and the good cowboy's reaction is so quick that he defeats the bad cowboy anyway. Then, the bad cowboy's henchmen aiming at the good cowboy from the roof are taken out by the townspeople, which doesn't have anything to do with this story, but should be mentioned anyway. Henchmen aside, scientists have discovered that there could be an evolutionary reason for the survival of the good cowboy, other than movie magic or a well placed firebox door in the case of Back to the Future III.

Physicist Niels Bohr allegedly once performed his own experiment involving this situation using toy pistols, and he won every duel against a fellow physicist despite always drawing second. Experimental psychologist Andrew Welchman of the UK's University of Bristol wanted to bring this experiment into the 21st century to see if there was any truth to it, and to find out if it could reveal something about the human mind.

His experiment didn't have any subjects aiming pistols at each other, sadly, but instead had them competing to push three buttons on a console in a specific order. Those who reacted to the first movements of their competitors moved around 9% faster then those who initiated the exchange, though the reacting subjects' movements tended to be less accurate.

Welchman believes: "It would be sensible for the brain to have a reactive system that went a bit faster than a system based on decisions or intentions." An inaccurate, but quick response system may have evolved in the human brain for when survival is at risk, where making an error is less important than having some kind of reaction at all. However, in the case of the cowboys we're talking about, expertise in the ways of the gun could reduce margin of error.

The study is not over-inflating the results found, as the scientists involved know that they are not incredibly significant. Still, a 9% quicker reaction time can easily be the difference between a win and a loss in many situations. I know that when I play Halo, I'll often surprise someone only to get embarrassingly owned despite beginning to empty my clip first. Now, we know one reason why this may occur. Either that, or I just suck at Halo.