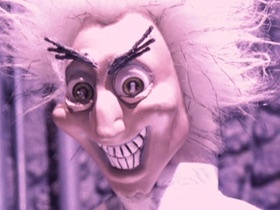 The Pentagon's mad superscience branch DARPA is at it again, announcing plans to tinker with the laws of evolution to create synthetic life forms that can live forever, or be instantly destroyed with a molecular killswitch.

Contrary to what Hideo Kojima might have you believe, the Pentagon's resident mad scientists at DARPA probably aren't making nuclear-capable walking battle tanks while pontificating on the nature of warfare and the human condition. But that doesn't mean they aren't up to some crazy sh*t, because they really, really are. Back in December, it was putting pigs in a state of near-undeath to save wounded soldiers, but the Pentagon's new project is tampering with the laws of nature on a staggering new level.

Included in the Pentagon's budget for next year is a relatively piddling $6 million dedicated to a project called BioDesign, a relatively unassuming moniker for a project with the goal of eradicating "the randomness of natural evolutionary advancement."

Yes, you read that right: BioDesign aims to harness state-of-the-art bio-tech to surpass evolution, because evolution just isn't good enough. The final goal of the project is to create living, breathing organisms from scratch that have been genetically engineered to "produce the intended biological effect." Said organisms will ideally have their cells bolstered with special molecules that prevent cell death, so that these artificial life forms can be "programmed to live indefinitely."

In case these super-creatures fall into the wrong hands, though, DARPA wants to cover all of its bases, ensuring that loyalty will be programmed into the creature's DNA itself, with genetic locks creating "tamper proof" cells. But if that weren't enough, the organisms will also have genetic serial numbers so that they can be tracked - and as a very last resort in case it all goes out, these aberrations of nature will come equipped with self-destruct devices:

Develop strategies to create a synthetic organism "self-destruct" option to be implemented upon nefarious removal of organism.

Holy sh*t. Do these people not watch movies?! Is it me or does this sound like the plot to a cheesy sci-fi/horror thriller?

Naturally, despite DARPA tossing $20 million at a new synthetic biology program, there are some serious roadblocks in the organization's plan. Evolution may not be as random or inefficient as they think, for one, and immortality is still quite a ways away.

Oh, and then there's all of the ethical dilemmas involved in literally playing God, but that's only if the science actually works.

There's no word on whether or not DARPA plans to conduct this research in a glorious Art Deco city constructed in secret beneath the waters of the Atlantic Ocean, but it strikes me as a particularly safe guess.