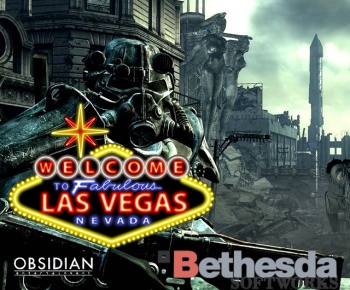 Some details regarding Fallout: New Vegas came out over the weekend including information about an optional Hardcore Mode, which will track things like the weight of ammo and your thirst level.

Fallout: New Vegas is due out this fall, but information on the game has been relatively sparse until now. Designed by some of the people who worked on the first 2 Fallouts, FNV is set in the wastelands of the Mojave desert. The City of Las Vegas was relatively unscathed by nuclear bombs, and there are more buildings intact and vegetation alive as a result. In FNV, you don't play as a vault owner, but you receive a Pip-Boy from someone who was. The story of the game focuses on the conflict between the New California Republic, the Caesar's Legion (a group of slavers based on the Vegas Strip), and the residents of New Vegas, with a reputation system to sort it all out. FNV uses the same engine as Bethesda's Fallout 3, but it is not a sequel, just another game set in the same universe.

The Hardcore Mode is optional, but allows for a more intense game experience. Combat is more difficult in this mode, and stimpacks heal over time instead of instantly. The ammo you carry has weight and can affect your performance, and you can die of dehydration, so its important to carry a well-filled canteen.

Josh Sawyer, the lead designer on the project, responded to questions about hardcore mode on the Bethesda forums. "It's true that a lot of people have modded in those features [in Fallout 3]," he said. "A lot of the things in Hardcore mode are also things that I personally wanted to play the game with. I realize not everyone does, but it's the only way I play it."

Skills have an effect on what conversation options are available to your character. Being skilled in Demolitions, for example, will allow you to talk about explosives in more detail. Again, Josh Sawyer chimed in on the forums:

There are a few reasons for including this:

* In the same way that a locked safe beyond your Lockpicking skill indicates, it lets the player know that there's an option here.
* Some of the NPC responses to low skill checks can be pretty entertaining.

It definitely appears that the dark humor the series is known for is intact. Melee weapons each have their own special attack in FMV. The special attack for one such weapon, a golf club, is called "Fore!" which whacks your enemy in the balls.