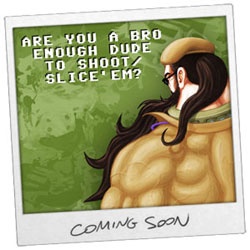 NeoGAF is creating a full fledged videogame with an extremely long name, and has brought Duke Nukem along for the ride.

A community project being developed over on NeoGAF has apparently attracted the talent of Jon St. John, the original voice of Duke Nukem. The game is called Dudebro - My Shit Is Fucked Up So I Got to Shoot/Slice You II: It's Straight-Up Dawg Time, with St. John voicing the game's hero, Dudebro.

Dudebro - MSIFUSIGTS/SY2, in addition to having a ridiculous name, is a parody of the stereotypes often included in videogames, such as macho, immature dudes and excessive violence. It's a top-down shooter that will pay tribute to old-school gaming, with crazy boss fights included. The game's story is as follows:

Dudebro II follows the exploits of elite soldiers John Dudebro™ and his sidekick Habemus Chicken as they chase anyone who threatens the world's brodiocity - an arms dealer, a voodoo priest, an evil glee club and more. Along the way, they'll have to fight through swathes of expendable enemies, including aliens, zombies and even yetis.

Don't believe the game is real yet? The extremely early version of Dudebro runs through a browser and can be tested through a link in its official forum thread, though it's pretty hard at the moment and shouldn't be taken as indicative of the final version. The over 100 unpaid developers of Dudebro are calling themselves Grimoire Assembly Forge and have put out an official press release, so they appear intent on following through with the full version.

The game will be released worldwide for free on its website.