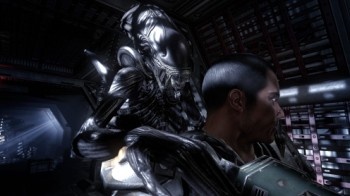 Aliens vs. Predator Senior Producer Dave Brickley says it's necessary for the game to be so graphically violent because if it wasn't, it would suck.

On the surface, it looks like a no-brainer: It's Aliens fighting Predators and graphic, splattery violence, therefore, is par for the course. Alien, after all, is the movie that gave the world the "chestburster" while Predator pioneered the cinematic art of spinal column removal. With pedigrees like that, it's hard to imagine a videogame based on the property as being anything but bloody.

It was an area of concern for Brickley, though, who said that the Aliens vs. Predator movies dropped the ball by toning down the gore, a mistake Rebellion was determined to avoid. "In spite of drawing on some great source material like the comics, the 1999 game as well as the original films, the AvP movies went for the biggest audience they could find with a lower age rating and that I think is what pissed people off the most," he told CVG.

"It's not something we ever even considered for the game, as you can probably tell by some of the kill moves," he continued. "But it's impossible to pay homage to the material without being so graphic."

It's like the old saying goes: If you want to make an omelet, you have to break a few eggs - and if the "eggs" happen to be a metaphor for the soft, squishy skulls of the Colonial Marines, well, so much the better. Aliens vs. Predator comes out on February 16 for the PC, PlayStation 3 and Xbox 360.