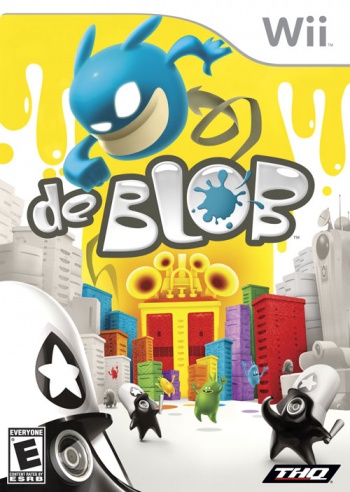 A bunch of THQ videogame properties are planned for transition into the world of television.

THQ and SyFy announced a partnership this week to bring established THQ videogame franchises to television and the internet. First up will be THQ's de Blob, an indie game developed by a group of students for the PC that was eventually released on the Nintendo Wii. A sequel is expected sometime within the next year.

de Blob, which tells the story about a blob that must bring color back into the world, will kick off SyFy's new SyFy Kids banner as the network intends to expand its audience into the age ranges of 2 to 17-year-olds. SyFy Kids plans to deliver (sy)ience-(fy)ction, fantasy, mystery, paranormal and action/adventure content via webisodes, television, and other media.

The deal also feeds into THQ's "transmedia" strategy, through which the company wants its videogame franchises to inspire movies, television, and toys. The deal is similar to that made for Viva Piñata, which was an Xbox 360 game that also became a Saturday morning cartoon show. I'm not sure which THQ franchise could come next after de Blob, as it certainly wouldn't be something like Saint's Row or Red Faction, but the company has plenty of kid-friendly titles to choose from. Videogame-to-television transitions normally seem to concern properties for youths, but it'd be pretty awesome to see Darksiders translated into a television show aimed at an older market too.

Gallery of the Day: 8 of the Best Worst SyFy Movies DrStrangelove 1 Comment