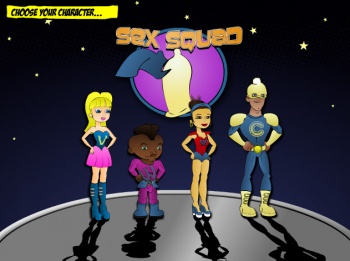 A Canadian health authority has enlisted the help of its target demographic to make an educational videogame about safe sex.

The Sperminator is threatening the city, and only Captain Condom, Power Pap, Willy the Kid, and Wonder Vag, better known as 'The Sex Squad', can stop him from covering the world in his evil sperm.

Adventures in Sex City is a educational game made by the Middlesex-London Health Unit of London, Ontario in collaboration with a group of 16-20 year olds and the youth mental health organization Mind your Mind.

Gameplay is simple, you get asked a bunch of questions about safe sex, and when for every right answer, you deflect one of the Sperminator's 'shots' back at him. Answer enough questions correctly, and the Sperminator will be cured of the sexually transmitted disease he's picked up and the city will be saved. Answer incorrectly and you won't raise your condom shield in time and the Sperminator's shot will hit you, but you'll still get an explanation of the answer.

Experienced Points: Why is a Bare Breast More Offensive Than a Severed Arm? Shamus Young 75 Comments
Comments on