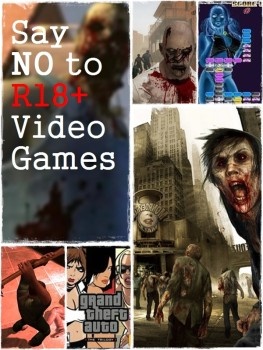 An Australian conservative blogger has launched NoR18Games.com.au, a website that advocates against the creation of an R18+ rating for videogames.

We all know by now that Australia doesn't have a "mature" rating for videogames and that although most Australians seem to want one, its addition to the classification system is being held up by a tiny minority: A minority of one man, in the eyes of many, who goes by the name of Michael Atkinson. But Atkinson isn't alone in his battle and as the public consultation on the R18+ rating in Australia slowly winds down, those who support his position are starting to make some noise.

The website "Say No to R18+ Video Games" claims that "many studies" have linked videogames to real-life violence and that as such, no such rating should be allowed in the country. "An example of a currently banned game that would be allowed into Australia is a Japanese creation where the player is encouraged to gang rape and beat young women," the site says. "Other games involve 'first person' playing where the player takes the role of torturing or mutilating people."

Once these games are allowed into Australia, site author Andrew Hazelton claims, the rating system will be meaningless because the government will not be able to control who actually has access to them. He also dismisses arguments that adults should have the right to choose for themselves which videogames they want to play because "There is not one single 'benefit' of R-rated games that will enhance or improve character."

The site features images taken from games like Manhunt, Wolfenstein, Grand Theft Auto and Saw, and of course the obligatory in-your-face references to RapeLay, the "terrible Japanese game creation where the player goes around raping young girls." There is no shortage of sensationalist misinformation, but perhaps the most telling comment can be found near the top of the site's front page.

"The Rudd government has released a discussion paper to gauge whether the Australian community wants R18+ games to be permitted," it says. "The 16-page Discussion Paper gives arguments for both sides. However, once you start 'discussing' a topic you open up the way for the law to be changed!"

In other words, the preferred course of action is not to argue the merits of an R18+ videogame rating, but to bury the conversation completely.

Still, in recognition of the fact that the discussion is pretty much unavoidable at this point, the site provides a template for making submissions to the public consultation as well as links to a petition against R18+ videogame ratings, news coverage of the ongoing debate and more. Unfortunately, but also unsurprisingly, the site offers no provisions for debating the matter or expressing a contrary opinion so there's not a lot to do for supporters of the R18+ rating, but if you'd like to poke around anyway, give it a look at nor18games.com.au.