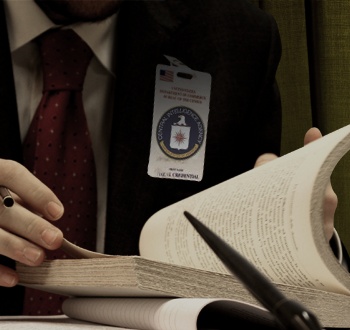 As far as most games are concerned, espionage is all about sneaking into a building and snapping the necks of unwary guards - but there's one game out there that makes you feel like the real deal.

It's no secret that people who make any sort of entertainment - games, books, or movies - tend to dramatize and glamorize the life of a spy. James Bond seduces and shoots his way through his missions for MI6, Solid Snake stealthily slips through the shadows before planting a tranq in some poor guard's neck and then having a 15-minute conversation about the nature of war, and Jason Bourne? Well, Jason Bourne just punches people. But actual spies live a life that is very different, and some might even say a little bit boring - but as Anthony Burch writes in Issue 241 of The Escapist, Spycraft is one game that attempted to put you in the shoes of an actual spy.

It doesn't sound all that exciting on paper. A game where you spend most of your time analyzing evidence and digging through files? Where you only fire your gun a half-dozen times? Where you do actual spying? There is absolutely no reason whatsoever that a game as steadfastly realistic as Spycraft should ever be exciting, fun or even remotely interesting ... which makes it that much more surprising that Spycraft is all of those things.

Activision's 1996 foray into the world of spygames is almost single-minded in its dedication to immersing players in the complexities of real-life espionage. Spycraft isn't about big setpiece moments, though it does have one or two of those. Instead, it's about the sensation of scouring through phone conversations for a single name, about using intellect, rather than firepower, to catch your prey, about spending 20 minutes going over a security photo with a digital magnifier until suddenly, wonderfully, you find the sniper's face reflected in a shop window.

To read more about Activision's unlikely attempt to portray the world of espionage as realistically as they possibly could, check out "World of Spycraft" in Issue 241 of The Escapist.

Escape to the Movies: The Losers MovieBob 168 Comments
Comments on