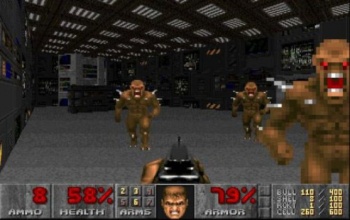 As if all the sex, drugs and violence weren't enough, now we've got something even worse to worry about in our videogames: Satan!

That's right, Satan. Devil worship. I'm talking about Beelzebub, bub. He's in your videogames, and he's stealing the souls of your doodz.

"This has been going on for the last 10 years, but especially in the most recent games," Lance Christian, a self-described avid gamer, told The Bulletin.

The most "egregious" Satanic games, according to the appropriately-named Christian, are Deception: Invitation to Darkness, Nocturne and Shadow Hearts, which is a bit of an odd list for "recent games" given that the newest of the bunch, Nocturne, was originally released in 2003.

Dragon Age: Origins also gets a mention for its depiction of "God going mad and cursing the world" despite the fact that the game has nothing whatsoever to do with the Christian religion: The god in question was the Maker and he wasn't mad, just really pissed off. Confusing things even more, Christian claimed, "A witch attacks believers and players can 'have sex' with her in a pagan ritual called 'blood magic'."

Predictably, EA gets special attention for the Dante's Inferno promotional campaign, which included things like the fake "Mass: We Pray" site, a "Number of the Beast" discount of $6.66 and a Super Bowl ad that promised, "Hell Awaits." Other games with "satanic themes" include Devil Summoner, Koudelka, Trapt, Bayonetta, Darksiders and Guitar Hero, presumably because of the presence of Ozzy Osbourne, Ronnie James Dio and/or Bobby Kotick.

ESRB ratings are of little help because they focus primarily on violence, sex, drug use and other potentially objectionable content, rather than spiritual beliefs. Eliot Mizrachi of the ESRB suggested that gamers with concerns over specific content could find more information on the board's website but as The Bulletin's crack team of reporters pointed out, "Few mentioned the overt satanic content of the games."

The number of games in which God is the enemy and Satan is the hero is growing, the report said, to the point that "even the most hardcore gamers are sounding the alarm." "This is just the tip of the iceberg in what I have discovered," Christian said. "I feel that the devil has a new tool to work with in this age of technology, and the majority of adults in a position of responsibility are left in the dark."