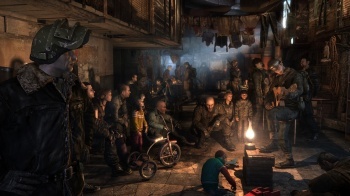 Sometimes it seems like console gamers have all the fun but THQ says that Metro 2033, the upcoming FPS set in post-apocalyptic Moscow subway tunnels, is going to be a "love letter" to PC gamers.

Developed by Ukrainian studio 4A Games, Metro 2033 is an end-of-the-world shooter in which most of humanity has been wiped out and those few who remain have been forced underground. In Moscow, that means the subway tunnels - the Metro - where they eke out a subterranean existence, making occasional, brief forays to the surface to scavenge for supplies.

It sounds cool and it looks even cooler, and that's an angle THQ is playing up; the game is being released for the Xbox 360 but with support for nVidia PhysX and DirectX 11, along with a planned 3-D version, it's Team PC that seems to be getting all the attention this time around.

"If you are a core PC gamer and you're wondering where all the love's gone when your PC games are just a slightly higher res version of what's on the console, then I'd say 4A are writing a love letter to you and doing absolutely everything to make the PC version phenomenal," said Huw Beynon, THQ's head of global communications.

For those with the equipment to handle it, the 3-D version of the game will offer even greater immersion that the regular release, although Beynon admitted that the market for it will be very niche, since the technology involved is still proprietary and a little on the pricey side. "3-D on PC uses nVidia's 3D Vision technology, so it's down to the specific hardware and you need a specific monitor for it," he continued. "So, for the time being, it's not like Avatar where hundreds of cinemas are equipped to do it. In gaming it's going to be a relative niche."