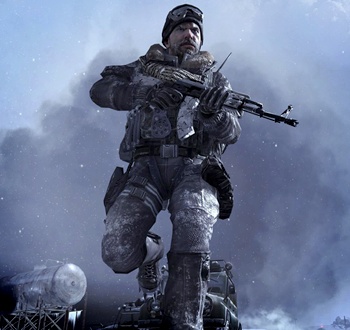 The fallout from the Infinity Ward / Activision showdown is still far from over: Ousted IW bosses Vince Zampella and Jason West are suing the publishing giant for unpaid royalties over Modern Warfare 2.

Despite a momentary period where it seemed things had settled down, it looks like we haven't seen the last of the Infinittwardämmerung just yet. Infinity Ward co-founders Vince Zampella and Jason West have sued Activision over unpaid royalties, according to a press release from law firm O'Melveny & Myers LLP.

To be precise: It doesn't seem that Zampella and West are claiming that Infinity Ward hasn't been paid royalties at all (as some were reporting), but rather are suing on the grounds that the two were terminated before royalties were due to be paid. According to Edge Online, the suit alleges that Activision's seizure of control of Infinity Ward was in violation of an agreement that granted West and Zampella "contractual rights" to control the Modern Warfare series, and includes claims for "breach of contract, breach of the implied covenant of good faith and fair dealing, wrong termination in violation of public policy, and declaratory relief."

"Activision has refused to honour the terms of its agreements and is intentionally flouting the fundamental public policy of this State (California) that employers must pay their employees what they have rightfully earned," said attorney Robert Schultz, representing the duo.

"Instead of thanking, lauding, or just plain paying Jason and Vince for giving Activision the most successful entertainment product ever offered to the public, last month Activision hired lawyers to conduct a pretextual 'investigation' into unstated and unsubstantiated charges of 'insubordination' and 'breach of fiduciary duty,' which then became the grounds for their termination on Monday, March 1st."

West spoke in his and Zampella's own defense as well: "We were shocked by Activision's decision to terminate our contract. We poured our heart and soul into that company, building not only a world class development studio, but assembling a team we've been proud to work with for nearly a decade. We think the work we've done speaks for itself."

"After all we have given to Activision, we shouldn't have to sue to get paid," added Zampella.

While it's tempting to automatically side with the little guys here - and to be fair, you don't sue a multi-billion-dollar corporation unless you're pretty sure you have a case to stand on - we'll just have to wait and see how this all turns out. Hopefully, open litigation will shed some light on what really went on behind the doors of Infinity Ward and Activision, and answer some of those persistent rumors floating about since this all went down on Monday.

Infinity Ward was founded in 2001 and acquired by Activision in 2003.