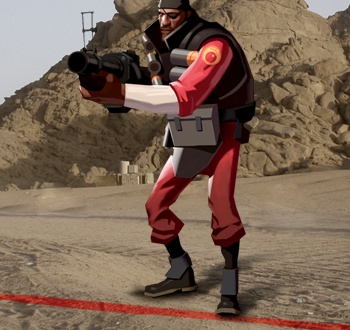 Some players try to use every advantage in a game to get ahead, but that makes it difficult to know when you cross the line.

As a gamer, we're trained to use everything available to us in order to excel. That includes leveling up, gaining new items and new abilities, but also using terrain and a game's architecture to create choke points or situations that are advantageous to the player. You could even argue that is why we play games in the first place, to test the boundaries put in place by the designers of the game. But there is a line where pushing for that advantage crosses into areas that the game designer never intended. Exploiting an obvious bug or glitch is considered cheating, but it's really just the extension of why we game in the first place. But other practices, like cooperative farming for achievements in Team Fortress 2, might follow the letter of the rules but not the intent; the player is supposed to earn those achievements, not sit idle in order to receive them falsely. Murray Chu examines the line when normal gaming turns into cheating in issue 243 of The Escapist:

One day, I bumped into a friend from another game on a public server. He had been playing Team Fortress 2 since its release, and his main class was the Medic. He only had a few achievements left to complete before getting the final weapon. Looking to help him out, I offered to meet him in an achievement server. His reply caught me completely off guard and forever changed the way I thought about achievement farming: He flat out called me a cheater.

Under normal circumstances, it wouldn't have affected me much. However, not only was my fellow Medic a good friend from real life, he was also an admin in a relatively popular MMOG, Yohoho! Puzzle Pirates. Coming from him, his condemnation was not merely a single person's opinion, but that of a person who got paid to enforce the rules of a game.

Many gamers hold on to the antiquated belief that if you can perform an action in the game, then it is ok to exploit or use it no matter if it was intended or not. Chu argues that the player himself has a responsibility to understand and interpret a game's rules, but some blame does fall on the developers. If a game studio has an open line of communication with its players that a certain practice is unacceptable, then Chu argues that peer pressure and server banning will auto-correct against cheaters. That sounds good on paper but it will still be hard to see exactly where The Thin Red Line is.