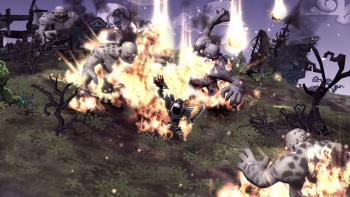 Deathspank and Shank are two upcoming indie titles that, unfortunately, probably aren't on many people's radars. EA obviously feels the same way as I do, as the company has just announced publishing deals with the developers of both games to bring them to XBLA and PSN, with Shank also coming to the PC. Neither game has a concrete release date yet, but both are expected in 2010.

Deathspank has street-cred for a few reasons. First, the creator behind it is Ron Gilbert, known for working on Maniac Mansion and also creating The Secret of Monkey Island. Second, Gilbert is developing Deathspank at Hothead Games, where he is Creative Director, the developer behind the well-received Penny Arcade Adventures RPGs. Third, Deathspank is supposedly a mix between Monkey Island and Diablo, a combination that is so awesome it can't even be explained using human language. It's described by Hothead as a game that includes "collecting loot, crazy puzzle solving, witty dialogue, collecting loot, over-the-top animations, fun, accessible action combat, and of course, collecting loot," and its first trailer was released back in September.

Klei Entertainment's Shank is a completely different game, combining an over-the-top side-scrolling brawler with vibrant hand-drawn visuals. The main character wields not only a chainsaw, but dual pistols, a knife, grenades, and various other weapons that are chained together fluidly for lengthy combo attacks. The game's main character, Shank, is very agile, able to run up walls and pounce on enemies to kill them while they're defenseless. The biggest aspect of Shank that sticks out to me other than the combat is its animation, which is very smooth and has a style unlike anything I've seen before in a game. Shank's trailer is also worth checking out.

Notably, these are two independent developers getting in bed with EA, one of the biggest publishers in the world. Jamie Cheng, CEO of Klei Entertainment says of EA: "They have been a fantastic partner and their understanding of the space is incredibly exciting." Ian Wilkinson, CEO of Hothead Games also confirms that EA is a great partner, saying: "We are proud of our independence, but are very excited to be working with EA Partners on a title as big as DeathSpank. With EA Partners handling distribution and marketing, Hothead can continue to focus on what we do best, making great games."

These statements indicate that EA isn't stifling independence here, but rather that it may understand the money to be made with games that are more unique. If successful, we'll only see more titles like Deathspank and Shank in the future, and thanks to EA, hopefully more people will know they exist.