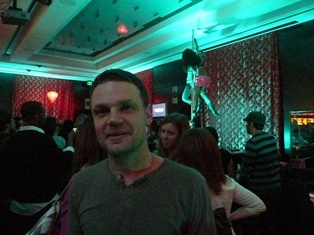 The PR for Activision recreated the Bam Bam Club from True Crime, complete with pole dancers.

The Public Relations department for Activision was in full swing to promote the reboot of the True Crime franchise at this year's GDC. Russ Pitts and I were treated to eye-popping visuals and amazing feats of dexterity, and the game looked pretty good too. We saw in-game footage of an early mission showcasing martial arts combat and chase on a stolen police bike. I was also able to speak with the executive producer of United Front Games, Stephen Van Der Mescht, on what sets True Crime apart from other games of its ilk. True Crime is due out this fall on the Xbox 360.

Van Der Mescht, who is of Dutch descent but emigrated from South Africa 12 years ago, believes that the most important gameplay feature of True Crime is that you aren't locked into one mode of play. The game has on-foot play, martial arts combos and shooting, and it seamlessly transisitons between those modes. "Missions don't play out just in running mode, or shooting mode, you have to use all of them in order to complete the mission," Van Der Mescht said. The team was inspired by the Hong Kong cinema style and the demo definitely seemed to play out like a scene from an early John Woo film.

He also hopes that that True Crime will have more of a global appeal, due to it being set in Hong Kong, a city with a strong East meets West background. "As with any open world game, the city is the central character," he said. Van Der Mecht's team spent a lot of time in Hong Kong cataloguing locations. They captured north of 27,000 photos and over 60 hours of video footage as research.

Part of that research was discovering Hong Kong's nightlife. As for Club Bam Bam, Van Der Mescht wanted his main character "to have a place where he can have fun with lady friends and enjoy Hong Kong's night club scene." Many thanks to the team for making that a reality in San Francisco.

True Crime has been under development for two and a half years. "It takes a long time to make an open world game," Van Der Mescht said. For him, it's important to make a game that "isn't just about action, but that presents a living breathing world."

If True Crime achieves that half as well as the PR team did recreating Club Bam Bam, then the game will no doubt be a success.