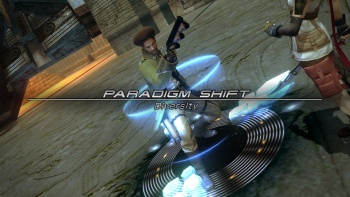 The latest entry in Square-Enix's landmark JRPG series is finally out all over the world, and it looks like it's been pretty damn successful.

Hey, what's that? There's a new Final Fantasy game out?! No way - we totally missed that! Geez, that one caught us by surprise.

Leaving behind the sarcasm now: Final Fantasy XIII hit shelves in Europe and North America yesterday, just under four months after its December release in Square-Enix's native Japan. The title was guaranteed to be a multi-million seller, and thus far has failed to disappoint on sales: Square-Enix announced that Final Fantasy XIII had shipped five million units worldwide.

While "shipped" doesn't always equal "sold," given the popularity of the long-running JRPG franchise, it's a pretty safe bet that the numbers in the second column will be catching up to the numbers in the first column soon enough.

More impressive, though, was Square-Enix's revelation that the success of Final Fantasy XIII brings the series' total sales to an astounding 96 million. Come on guys, just squeak out another 4 million and you'll be there!

Reception for Final Fantasy XIII has been mixed: Some people have absolutely loved it, whereas others have criticized it for poor pacing and linearity. It's a very polarizing title, judging from the wide range of review scores on sites like Metacritic.

Personally, I'm 4 1/2 hours into it, and it's actually better than I expected - though to be fair, I went in with fairly low expectations. Sazh (black guy with the Chocobo in his hair) is shaping up to be one of my favorite Final Fantasy characters in a very long time, but Lightning is basically just Cloud with less amnesia and more boobs, and that's not a good thing.

The combat system is actually really awesome though.