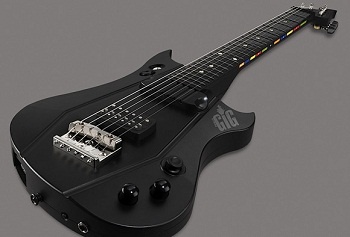 The future of guitar-based rhythm gaming may be using an actual guitar as a controller.

Power Gig is a new game being created by Seven45, a new studio comprised of former LucasArts, Pandemic, Atari and Vivendi developers. Power Gig's goal is to advance the rhythm game genre to new heights with greater control complexity and a near-exact simulation of playing a real guitar.

While the Power Gig controller can actually be plugged into an amp and played normally, there are a few differences from a normal guitar. The frets of the guitar are all color-coded much like the standard Guitar Hero or Rock Band controller, with green, red, yellow, blue and orange segments that repeat further down the neck. In the actual game, players will eventually be required to finger chords and use the proper string.

Seven45 hopes this increased complexity and real guitar simulation will push them ahead of the competition and revitalize the genre. "This is what we think the consumer has been screaming for in the videogame business," said VP of marketing Jeff Walker. "With our hardware expertise we are in a great position to go into a genre that is on the decline, kick it in the ass and turn it around."

While much closer to the real thing, Power Gig won't teach you everything you need to know about playing a guitar. It will not require or teach the ability to read music, for example, nor will it give the general technique instructions a real guitar instructor would. Still, for fans of Guitar Hero or Rock Band looking for a bit more simulation in their guitar game, this could provide a nice alternative. That said, with how much a real electric guitar costs, one has to wonder how much these peripherals are going to run.