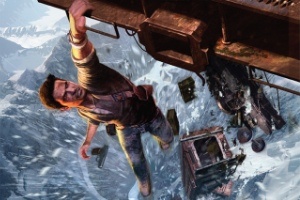 Calling fully-movable and transformable set pieces like Uncharted 2's train and hotel levels the "holy grail" of action games, Naughty Dog's Co-Lead Designer, Richard Lemarchand, says that the team's decision to incorporate such elements into Uncharted 2 was both the reason for the game's phenomenal success and the straw that almost broke the game's - and the company's - back.

"We really wanted to create ... a fully-playable version of a big summer blockbuster action/adventure movie which kept the player in moment-to-moment control ... as drama exploded around them," says Lemarchand.

In order to realize this dream, Naugty Dog had to pursue one of what he considers the most important, and never-before-achieved design elements: fully traversable set-pieces.

Naugty Dog calls the result their "Dynamic Object Traversal System," and it's what makes it possible to conduct a running gunfight across the top of a moving train, for example, or duck and roll through an open window while the hotel you're standing inside of comes crashing down around you - both levels that Naughty Dog dreamed up very early in the game's production cycle, and what Lemarchand calls "a handful of ideas that [were] simply too good to not include in the game." Lemarchand warns developers who might be inclined to follow in Naughty Dog's footsteps that such levels are "amazingly complicated."

"The set pieces had taken much longer to create and polish than we'd anticipated," he says, and he offers advice to those who'll be looking to set the mark further with their own games:

"We know that a lot of developers who enjoyed Uncharted 2 are probably going to be aiming high now in terms of their own set pieces. So another important take-away from this ... is a warning about just how long it takes to get that stuff right."

Among the bugs caused by the decision to make the train fully traversable were that grenades thrown by the player - at first - would simply fly back in their faces and the targeting was lagging a frame behind the on-screen action, causing your gun to aim not where the enemy was currently standing, but where they had been standing in the previous frame. Considering the enemy was standing on a train moving at a simulated 60 miles per hour, this meant that the game's auto-aim feature was causing the player's aim to be about 2 meters off target. None of this, obviously was acceptable.

But the problems didn't end there. According to Lemarchand, one of the biggest problems faced by the team was that the game's frame rate was taking a massive hit from all of the moving objects and detailed scenery.

"Nine months before launch we suddenly realized that our frame rate was - to put it bluntly - pretty crap," he says. Naugty Dog buckled down and made solving the frame rate problem a "huge focus."

"The only way that we were able to tackle it was to regard it as a very serious problem that we simply couldn't let slide. ... In the Spring of 2009 ... we realized just how big of a game we had bitten off and ... we were either going to have to chew extra hard or make some cuts or choke."

The next several months leading up to Uncharted 2's launch, says Lemarchand, were among the worst he and the rest of the team had ever experienced as game designers, surpassing even the most brutal crunch periods any of them could remember. He admitted that the stress was ultimately self-deating, causing further stress, illness and reduced productivity, but he offers that they simply had no choice.

"Even though ... the way we work may seem like a pretty seat-of-the-pants way to do things," he says, "we think that it's the way that a lot of game developers [work] and that we just have the courage to make it an official part our our process. ... It's really only because of our ability to work together without much friction that our games always come together on time."