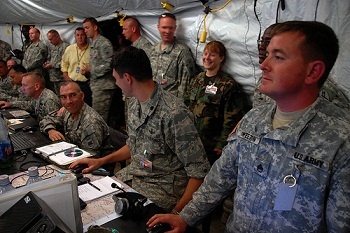 The US Government is hoping videogames will save the lives of American soldiers.

In an effort to reduce casualties, the Pentagon has approved an unspecified level of funding in order to study how it can most effectively use the advancement of gaming technology in the training of its soldiers, US Joint Forces Command General James Mattis said.

Currently, 80 percent of all casualties since World War II have been among the infantry, something the Pentagon is trying to reduce with this new program by developing simulations that will run troops through "as many tactical and ethical challenges as we can before they go into their first firefight," Mattis said.

Though the Pentagon hopes to capitalize on the power of current generation gaming technology, it will not replace traditional training methods.
"We will still have to do live fire training. It won't give us a risk-free environment," Mattis said. "But I'm convinced, both ethically and casualties-wise, we can reduce the missteps that we are taking on the battlefield, and reduce them significantly," he said.

While the Army already makes use of gaming for recruitment and training, opponents of the training method worry that the ability to simply reset the game after a failure will keep recruits from appreciating the price of failure. The programs could be "potentially revolutionary," Brookings Institution senior fellow P.W. Singer said in the most recent issue of Foreign Policy, but there is concern this will blur the nature of war which is already being threatened by the increased use of unmanned drones in combat.

Be that as it may, if the Army can make functional training programs to prepare our troops so more of them come home alive, I don't think many people are going to object.