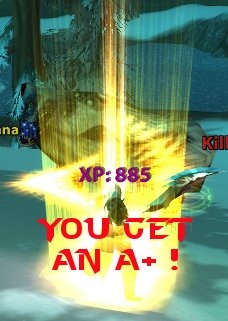 A professor at Indiana University has instituted a system of gaining experience points through classwork instead of receiving traditional grades.

Lee Sheldon is an accomplished screenwriter and game writer, having worked on TV shows like ST:TNG and Charlie's Angels as well as the Agatha Christie series of games from The Adventure Company. He now teaches game design courses for Indiana University's Department of Telecommunications. Instead of assigning his students a grade at the end of the course, he instead starts every student at 0 xp and they earn points through completing quests like solo projects and quizzes in addition to grouping up for guild projects and pick up groups. How many points they have at the end of the course determines their actual "grade."

Sheldon put the system in place so that his students were motivated by the game theory with which they were familiar. "The elements of the class are couched in terms they understand, terms that are associated with fun rather than education," Sheldon said. He went on:

There will always be a portion of the class who will not be motivated to learn no matter what an instructor may try. Those that are not as involved, one or two out of a class of forty, are pretty much drifting through life anyway thanks to factors the classroom can't really address.

There is a question as to whether the technique would work with courses that didn't cover game design but Sheldon argues that it is a cultural movement now. "We are teaching the gamer, social networking generation," he said. "I have no doubt the students will respond positively to any number of non-game-related classes taught in a similar manner."

Beyond just education, Sheldon believes that his class structure idea can have a bigger impact in the workforce:

As the gamer generation moves into the mainstream workforce, they are willing and eager to apply the culture and learning-techniques they bring with them from games.

It will be up to management, often of pre-gamer generations, to figure out how to educate themselves to the gamer culture, and how to speak to it most effectively.

I'm not sure if that's ever going to happen, but I do think that I would sure love a job that gave me experience points for cleaning the fryolator instead of just telling me to do it. And then when I finally level up, I could tell my manager to f*ck off and give that job to the noobs.

Yeah, I could get behind that.