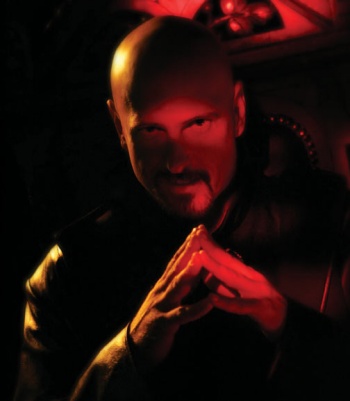 Joe Kucan directed the cut-scenes and starred as Kane in each Command & Conquer game, but he admits to making it all up as he went along.

The Command & Conquer franchise has been around a long time. You could even argue that it jump-started the real time strategy genre way back in 1995. But even though Joe Kucan holds the Guiness World Record for longest-running continuous portrayal in a videogame for his role as Kane, he had no idea that the first game would be the birth of a franchise. And when each installment was made, it may have been the last, so Kucan said that's why he is just as much in the dark as to what Kane's true origins are.

"When we did the very first game I thought it was going to be a one off," Kucan said. "Command & Conquer, maybe an expansion disc and then move on to another Command & Conquer-like game. I didn't realise that we were creating a franchise.

"Games hadn't really begun to franchise then. Adventure games like Police Quest had franchises, but the idea of a franchised game never really occurred to me - I didn't have that sort of vision. It's just mind boggling."

It is certainly true that the videogame industry was much less interested in eternally sequelizing back then (excluding RPGs like Ultima and King's Quest). But still, Kucan was reluctant to tell his audience that the overarching backstory for Command & Conquer was essentially written for each game. As Kucan says:

We don't like to admit this but we made it all up as we went along. The truth about Command & Conquer is that we never really planned on a giant, sweeping arc of a story that would create canon from one game to the other. We knew we'd created holes that we needed to fill, so we just made it up as we went along. There was really no grand, sweeping plan and I think that's what made it so much fun.

We've left a lot of unanswered questions that the players can go back and fill in themselves. Whenever I kind of wink and nod and say, 'Yeah, I know what's going on,' I'm lying through my teeth. I don't have the slightest idea. I don't know who Kane is, where Kane came from, what he wants or where he's going. We just make it up as we go along and let the players sort it all out.

So where do you think Kane came from? Or more importantly, where is he now? I personally think he found his true calling and is now editor in chief of a certain videogame website.

The Needles: The Russians Are Coming! Andy Chalk 32 Comments