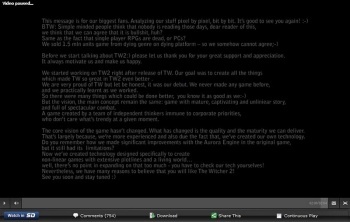 The sneaky guys at CD Projekt Red slipped a little something special into the promotional trailer for The Witcher 2: A hidden, single-frame message for its "biggest fans," promising bigger and better things for the future of the franchise.

The Witcher 2: Assassins of Kings was officially unveiled yesterday with a hot cinematic trailer and an overhauled Witcher website. CD Projekt had already acknowledged the existence of the game following a leak of an early gameplay video last year, but yesterday's announcement represented the game's "official" unveiling.

But there was a little more to it than met the eye: Hidden in the trailer at just over the 2:00 mark was a message to the game's most hardcore fans, those who would "analyze our stuff pixel by pixel, bit by bit," promising in amusingly fractured English that the lessons learned in creating the original game would be put to good use in the new one.

"We are very proud of TW [The Witcher] but let be honest, it was our debut. We never made any game before, and we practically learnt as we worked. So there were many things which could be done better, you know it as good as we," the message says.

"But the vision, the main concept remain the same: Game with mature, captivating and unlinear story, and full of spectacular combat," it continues. "A game created by a team of independent thinkers immune to corporate priorities, who don't care what's trendy at a given moment."

And who apparently know that their fans expect them to do something like hide a message in a game trailer. Is it any wonder why I love crazy Eastern European game studios?

Miracle of Sound: Encore: Silver And Steel and Shadows In The Moonlight MiracleOfSound 36 Comments