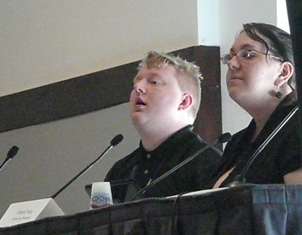 At PAX East, a group of gamers created the design document for a tabletop RPG in under an hour set in a world where dinosaurs never died, and are crack reporters.

Led by David A Hill Jr, head of the independent game publisher, Machine Age Productions, the group brainstormed original ideas for a new game. Focusing on the big ideas like who the characters are and what they are good at, Hill solicited ideas from the crowd and his wife Filamena Young, also a writer and game designer, took notes which were projected for us all to see. Hill asked for suggestions and, if decisions were needed, he solicited a show of hands from the crowd.

In an hour, we hashed out that the characters are investigative journalists in a world where dinosaurs never went extinct, possibly due to a time traveler messing up the first extinction. You could play as a human or a dino, and your party is out for the next big story that "The Man" is trying to suppress. You have attributes such as Intrigue and Moxie, and use a resource based system to determine success and get the story in on time. Other than the great dino conspiracy, deadlines are the biggest enemy in Scoop!.

Hill has worked on some big name RPGs for companies like White Wolf and Shadowrun, as well as far too many third party D&D products to list so he was able call upon his experience to veto certain ideas and encourage others. For example, when he asked for ideas on what kind of game we were going to make, a hapless gamer shouted out, "Steampunk!"

"I'm going to veto that right now," Hill said to applause from the crowd. Despite his wife remarking that he hated money, Hill did have a good reason. "For one, it's the first thing that everyone comes up with. It's a real big fad right now, we've done that a million times. We're going to try for some new challenges.

The panel was certainly an interesting exercise in crowdsourcing. There were probably around 200-300 people in attendance, a much bigger crowd than Hall was used to, but I estimate that only about 20 people were active in offering suggestions, with 5 of those pretty frequently. Yet everyone voted and I really think the best ideas bubbled to the surface.

It wasn't until the end that Hill asked what the name of the game would be. Several suggestions were thrown out including "Veloci-reporter" and "Tyrannosaurus Rolodex" until the crowd voted for the more simple and evocative Scoop!. When Hall asked for the one sentence "slugline" which would describe the game in one fell swoop, he added a bit of gravitas.

"Whenever you are going back and you're filling in the details, you can use that sentence to help you make decisions," Hill said. "If you don't know whether you want to use an "apple" or an "orange," whichever one is closer to that sentence is the answer."

With that in mind, one gamer in the front said, "A game of cold-blooded journalism." Everyone around him ooed and ahhed and the room applauded.