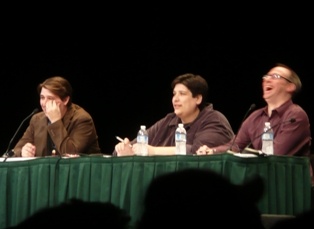 The format for this panel came about when Jeff Kalles started hanging out with Krahulik and Holkins of Penny Arcade. Kalles' job at Nintendo was to hear game pitches and decide which were the best ones to move forward with development, and the PA crew thought it was funny to spend hours pitching him their own ludicrous concepts. Krahulik pitched Amish Butter Churning, while the more management-oriented Robert Khoo, of course, pitched a business RPG, and Porkfry thought Backyard Rock Fight would be a great game. It was so much fun that Kalles ran the process as a panel at the first PAX in 2004 where attendees offered their ideas and got either viciously shot down or had their creativity rewarded with a prize or two. He's been doing it at every PAX since, and Kalles said it's his favorite event at each show.

For PAX East 2010, the panel consisted of Kalles, Scott Kurtz from PvP, and Tim Train, president of Big Huge Games. Kalles apologized in advance for any possible meanness saying, "If this is like American Idol, then we're all Simon."

There were a slew of ideas that were just silly like Transformers Volleyball (rejected for licensing problems) and a game about a group of badass female commandos which the panel dubbed Cooch Force Five. Some had a great initial pitch but the gameplay didn't hold up after questions from the panel. The best of these was a game based on ex-governor of New York Elliot Spitzer and it would only contain escort missions. Ba dum crash.

If the above examples are any indication, games with sexual innuendos were the norm. There was Celebrity Sex Tape Hero which "mated the modern rhythm game with the original rhythm game." In response, Kalles said, "That niche has been filled. Repeatedly."

Another game idea was called Just the Tip: See How It Feels which got an immediate yes, and seemed to have an interesting Heavy Rain-like concept which investigated the male experience of temptation and frustration, but was actually just a vehicle for massive puns. You'd go to a restaurant on a date, and the meal is free but you have to pay the tip. At a basketball game for another date, you'd only get to watch the opening tip. "On the way home, they get mugged and he's got a sword on him, but it turns out he can only get the tip into the mugger," said the gamer. "There's also flashback scene, some of his relatives were on the Titanic. You're playing the iceberg, in this case, and just the tip of the iceberg gets into the Titanic." The crowd laughed uproariously, including me. But it didn't win.

The top three games were decided by the panel. Third place went to a Moonwalker homage featuring Lady Gaga. Kurtz thought this idea would be commercially viable, and might even be fun. "I can think of a billion things for it, I can see her power up being Costume Change!," he said. "The sad thing is that this game would really sell."

"Virtually regardless of what the gameplay mechanics were," said Train. "I could see the first level in a women's prison."

Second place went to Don't Fall Out, an iPhone or DS game which had the very simple mechanic of keeping the protagonist from falling out of various objects like cars, trains or planes. You would touch the screen on structures to hold on to them and have to move to others when those structures start to break. "I love how the concept is so distilled, right down to its core essence," said Kalles. "What's my game about? You try not to fall out."

The winner was a potentially really dangerous game called iDrag, which is combination iPhone app and real life drag race. You put the iPhone on your dash when you are driving somewhere and it will ping you if someone driving near you also has iDrag running. Then the race starts to, say, the third traffic light from this one. "I'm driving to work and I turn on iDrag," Kurtz summed it up. "So then when I'm driving next to someone who also has iDrag on, they connect, and it's like 'You have a challenger!' But instead of two guys in nice cars, it's a guy in a Chevy and another in a Sebring."

"There's addons you can get," the gamer pitching it said. "After a while, it knows your way to work so you can link up with different people over time. You can take the seatbelt off and you get extra points." He went on: "You can actually turn on the phone and talk to people, perhaps the person you're racing against, and get 'star power' for talking while driving."