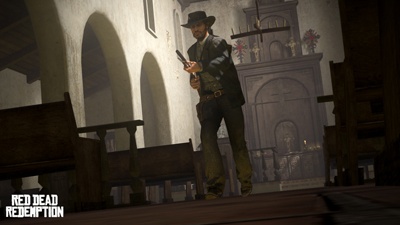 When it comes to sandbox-style games, the gold standard is Rockstar's Grand Theft Auto series, so it's not terribly surprising to discover that the upcoming Red Dead Redemption is cut from very much the same cloth. At the same time, its setting in the Old West gives the by-now well-worn gameplay a completely fresh feeling. Plus, you get to make chickens explode in a frenzy of feathers, which has to count for something.

You play as John Marston, a former outlaw who has changed his ways, gotten married, and settled down. But since domestic bliss wouldn't be much of a game, the government nabs your family and gives you your mission: round up (and preferably kill) your old gang or else. Saddle up, it's time to spill some blood.

Redemption's gameplay will immediately feel familiar to anyone used to GTA or similar sandbox-style games. Either on horse or on foot, you can roam around the wild prairie as you search for your old cohorts or complete side quests. You can expect to run into some critters out there in the wilderness, but you can hunt them, skin them, and sell their pelts for profit. I couldn't get an answer on whether or not you could also eat the meat to regain health, but after playing the game, I'm guessing not. Your health regenerates, so just taking cover for a few seconds should usually be all you need. Medicine will cover the times when you're really in danger of pushing up daisies.

The weapons are what you'd expect from the game's Old West setting: you'll acquire a healthy sampling of pistols, shotguns, rifles, and even a Gatling gun. You also have a "Dead Eye" ability, which is something like bullet time. Activate it, and time stops, giving you a brief opportunity to paint your victim with targets. Hit the button, and you open up a hail of gunfire on the targets and decimate the bad guy. If the bad guy in question also happens to be a chicken, it'll pretty much vaporize in an explosion of feathers. Not that, you know, I tried that during the demo, or anything. Sicko.

GTA IV was a pretty fine looking game, but I have to say, I greatly prefer Red Dead Redemption's wide open spaces and scenic vistas. You can see for miles, it seems, and if you can see it, you can ride to it. The game also has a day/night cycle, allowing you to enjoy both the sun-baked beauty of the desert and the cool loveliness of moonlight. Yes, I'm romanticizing a bit, but it's hard not to when you see the game. It is a Western, after all. You can collect various kinds of horses, all of which are beautifully animated, and add them to your stable. The voice acting and soundtrack are top notch, too.

The demo I played was fairly short and to the point, highlighting Red Dead Redemption's combat and cover system, but it made me want to play more. They wouldn't tell me whether or not you can visit a brothel (I doubt it, what with you being married and all) or tell me about the upcoming DLC (that announcement should be out next week, but mark my words, it'll be multiplayer or co-op), but I saw more than enough to pique my interest. GTA IV was just too dreary for me. I felt hemmed in not only by Nico's criminal doings but also by the city itself. Red Dead Redemption looks to have all the technological power of GTA IV without the claustrophobia. Or the obnoxious cousin with a cell phone fixation.

Red Dead Redemption will be out May 18th.