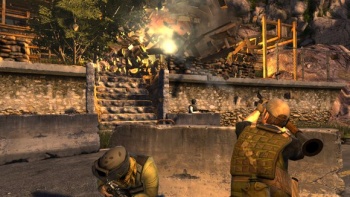 The man accused of trying to steal the code for Atomic Games' Breach from the PAX East show floor contacted the authorities to arrange a new court date after failing to appear for arraignment earlier this week.

It's recap time, everybody! A 20-year-old gamer by the name of Justin May was arrested at PAX East '10 after allegedly trying to steal the code for Atomic Games' Breach from the show floor. Bad enough, right?

Well, after posting a $200 bail, May failed to show up for his arraignment on Tuesday, March 30th. A warrant was issued for his arrest, leading many to speculate that he'd skipped out entirely, trying to avoid the long arm of the law.

Not so much, really. According to Joystiq, May has agreed with the court to have his arraignment hearing on May 19th, though the report gives no indication of why May missed his court date in the first place. According to his Xbox Live gamertag, though, he was too busy playing Modern Warfare 2.

"No, no additional charges at this point. He actually contacted the court upon learning of the default warrant and made arrangements to postpone the court date. Given that he and his whereabouts are known to authorities, that he has no criminal record, and that he affirmatively contacted the court, his request was granted. At the end of the day here, we aren't exactly dealing with John Dillinger, you know?"