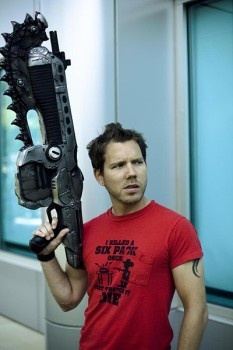 Epic Games' Cliff(y B)leszinski famously announced Gears of War 2 while wielding the series' trademark chainsaw gun, but he won't be doing the same when he announces a new game on Late Night With Jimmy Fallon next week.

Earlier this week, Late Night With Jimmy Fallon host, um, Jimmy Fallon Tweeted that audiences could expect Epic's Cliff Bleszinski on next Thursday's show - and what's more, he'd be announcing Epic's next game! Given that next Thursday is April 8th, the date that Edge had previously pegged as the date we'd get the first Gears of War 3 teaser trailer, common sense says the two are probably linked in some way.

But if anyone was expecting Bleszinski to repeat his GDC '08 announcement of Gears 2 - where he tore through part of the set with a Lancer chainsaw/gun hybrid before calling the new game "bigger, better and far more badass than the original," you may be in for a bit of a letdown. As the designer Tweeted: "I shall not say 'bigger better blah blah' or carry any weaponry for the Fallon announce." There you go, Cliffy, breaking the hearts of people who love impractical weaponry everywhere.

Of course, it's always possible that the rumors have been just that - mere rumors - and Bleszinski will be appearing to announce a new Shadow Complex or Unreal or something, VG247 points out that the Epic frontman said something else at the Gears 2 reveal. "It's a funny thing about rumours on the internet: once in a while, they're actually true."

So, yeah. Gears of War 3 is almost certainly going to be announced on a major, mainstream, non-gaming, non-cable television show. That's kind of cool, no?

Jim & Yahtzee's Rhymedown Spectacular: To Game Or Not To Game Jim And Yahtzee 82 Comments
Comments on