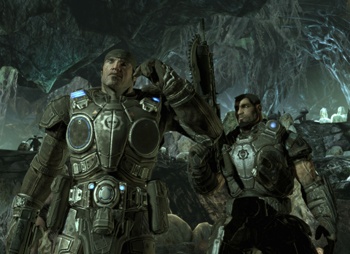 Things aren't looking too good for the Gears of War movie, which has reportedly been dramatically scaled back and lost most of the high-priced talent that had signed up to take part.

It was in May of last year that the Gears of War movie was looking "incredibly good," according to reports; screenwriter Chris Morgan, whose past work includes Wanted and Fast & Furious, had completed a draft of the script while Len Wiseman of Underworld and Live Free or Die Hard fame has been signed as the director. Befitting the game franchise, the project was going to be big: "A multi-generational epic with a big-canvas feel," as the L.A. Times put it.

It now appears that will no longer be the case. The film's budget has been cut dramatically, from over $100 million to "a good chunk less than that," while the story has also been reduced in scope and will now be "a more simple, straight-ahead invasion story." Morgan appears to be out, as producers are currently looking for a new writer, and Wiseman is expected to go too.

Specific reasons for the changes weren't provided, although as the report notes, the nature of videogames can become a "complicating factor" as development moves forward because much of what made them popular properties in the first place can't be translated to the big screen. It's quite possible that New Line Cinema, the studio behind the film, looked at the history of videogame movies and decided that a cheap, quick-and-dirty approach would have a better chance of turning a profit than a full-out summer blockbuster. Whatever the case, it sounds like gamers are going to have to wait awhile longer for their great silver screen experience.