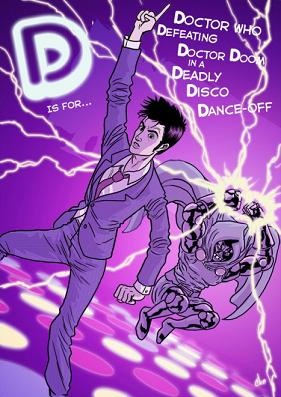 As almost every English-speaking child knows, A is for Apple. A is also for Awesome, as in "Holy crap, this is a totally freaking Awesome version of the alphabet."

It's a safe bet that all of us at some point learned how to read the Roman alphabet via the most mundane of mnemonics: A is for Apple, B is for Boy, C is for Cat, D is for Dog, E is for Etc. Effective, yes, but nowhere near as face-rockingly amazing as the "A-Z of Awesomeness."

A series of illustrations by artist Neill Cameron, the A-Z of Awesomeness attempts to spice up the boring ol' alphabet with as much fantastically geeky alliteration as can be reasonably crammed into any one picture. B is for Buffy Bravely Battling Beelzebub; G is for Galactus Geeking out with his Glove puppets of Gundam and Godzilla; O is for Optimus Prime Obliterating Oompa-Loompas, and so on.

While the pure silliness of the the actual "(Letter) is for (Description)" is enough to sell this on its own, it's the hilarious illustrations that really pull it together. Well done, Mr. Cameron - well done indeed.

You may have seen this before, as it was first put together via Mr. Cameron's Twitter/Facebook during the summer of '09, but I'm sure that there are plenty of people out there (like, for instance, myself) who haven't seen it before. So this is for all of you poor, deprived souls who haven't yet known the glory that is Uhura and Ultraman on a Unicorn Underwater.