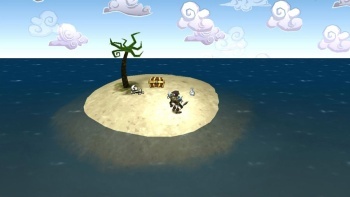 Gilbert got his start in the industry with the 1985 title Koronis Rift before making a big splash with old LucasArts favorites like Maniac Mansion, Zak McKracken and the Alien Mindbenders and of course The Secret of Monkey Island and Monkey Island 2: LeChuck's Revenge. In 1992 he left the company to launch Humongous Entertainment, where he focused on creating children's games like Putt-Putt, Freddi Fish and the Backyard Sports games.

In 2007, Gilbert began collaborating with Hothead Games on the development of the first Penny Arcade game, On the Rain-Slick Precipice of Darkness, then joined the company full-time in January 2008 as creative director. At the same time he announced that he was at work on a new game, Deathspank, "described by top scientists as Monkey Island meets Diablo," which is a pretty damn awesome combination by any measure.

But yesterday, Gilbert let it be known that he's left Hothead, although he said he'll still be "working closely" with with the studio and with publisher EA on Deathspank publicity. "When I started working there two years ago, my goal was to make DeathSpank the most awesome game ever made and have it win a Nobel Prize and the early word out of Stockholm is that DeathSpank is neck-in-neck with some string theory dweeb (eleven dimensions my ass)," he wrote on his Grumpy Gamer blog.

"As DeathSpank ends the creative and production phases and starts down that long and winding road of certification and testing of the XBox and PS3 and [REDACTED] versions, it's looking quite amazing and is damn funny," he continued, hinting strongly that the game would be released on three platforms instead of just two. "So, to quote my childhood hero George W. Bush: Mission Accomplished."

It's interesting to note that Gilbert's departure follows closely on the heels of the sudden cancellation of Penny Arcade Adventures, the game series that brought him to Hothead in the first place, which could reasonably lead to speculation that there might be a connection between the two events; on the other hand, the Penny Arcade guys said the decision to drop Adventures was made primarily so the studio could focus 100 percent on Deathspank, Gilbert's own game. Coincidence? I think... well, probably.

Deathspank is scheduled for release later this year.

Gallery of the Day: 8 Pirates from Videogames That Arr Awesome DrStrangelove 12 Comments
Comments on