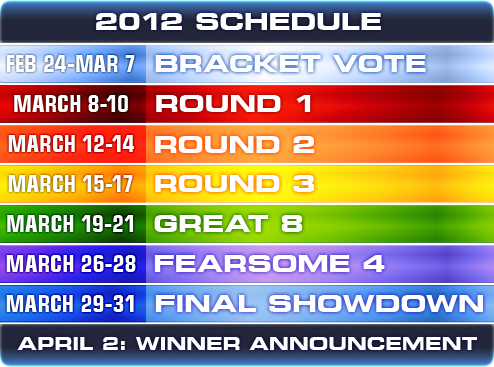 March Mayhem: Developers' Showdown is an exclusive event on The Escapist where the top 64 game developers go head-to-head in an elimination style tournament to see who comes out on top. Who makes the call on which developers make it to the next round? People like you from around the world! Developers will be relying on your votes to progress through the tournament and take home the March Mayhem title. Last year, the Final Round brought Mojang AB a stunning victory upset over a very difficult match-up against BioWare. From upsets to blowouts, nobody knows what will happen this year, but we guarantee it will be fun to watch and participate!

The voting begins March 8th and lasts until March 31st, after which the winner will be announced. Not only that, but voting and tweeting for your favorites in the tournament will grant you a chance to win some awesome prizes, including a fully loaded gaming pc by our friends at ORIGIN PC! Also, make sure to check out all of the tabs at the top of the page to help you navigate quickly through March Mayhem content.