Almost as bad as the hacker craze of films from a few years back. 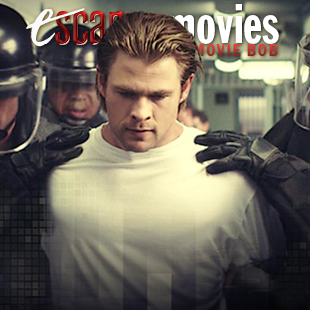 Let's get one thing straight here: Blackhat director Michael Mann may just be the most aptly-named filmmaker working today, in as much as he is THE MAN. He created Miami Vice. His filmography includes Thief, Manhunter, Last of The Mohicans, Heat, The Insider and Collateral. There's probably nothing he can do to tarnish that kind of filmography. I mean, geez man... have you gone back and watched Last of the Mohicans lately? Or Heat? Or Collateral? Cause they're fucking awesome!

But yeah, there's probably nothing that any filmmaker could do that'd put a dent in that kind of legacy. Which is partly why it's so interesting to watch a movie as terrible as Blackhat seemingly try to do just that. An overlong, plodding, immensely silly yet also profoundly boring throwback to the moronic cyber-paranoia thrillers of the 90s, the film only comes to life when it wants to prove just how dumb it can be. The nicest thing I can think to say about it is that I appreciate that they released it in January rather than a month earlier so that Clint Eastwood, Ridley Scott and Michael Mann wouldn't all have to be on the same Year's Worst list.

How bad are we talking? Well, maybe not as bad as The Net, but if you can imagine Hackers without the difference-making presence of a 20 year-old Angelina Jolie, you'd be pretty close. The film's first shot even involves - yes - a cheesy CGI sequence of the camera diving through illuminated computer wires, because apparently in three decades we still haven't figured out a way to visualize hacking cinematically.

It's the sort of film where the "blackhat super-hacker" furloughed from federal prison to help a joint U.S. and Chinese task force bring down a cyber-blackmailer using his special code for nefarious ends is played Chris Hemsworth and also looks inexplicably like Chris Hemsworth because sure, that's what a 24-7 code junkie looks like, probably. It's the sort of film that tries to make up for a lack of overall plot engagement by staging every exposition dump as a telephoto pan of various actors standing around in pseudo-exotic locales giving excellent sunglasses game, while the wardrobe department implies that the sequel will involve Hemsworth's determined search for whoever keeps stealing the top three to four buttons from all of his shirts. 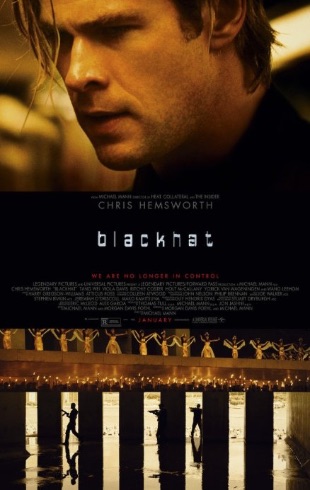 The whole "hacker action thriller" thing was stupid when it was invented back in the 90s as a way to graft newly-minted cyber-buzzwords onto tacky espionage tropes. It's kind of mind-boggling to see them trotted out in 2015 when even the most clueless of citizens must have by now absorbed the fact that the real terrors of hackers and The Dark Web aren't fast-finger Bond villains remotely blowing up nuclear reactors or crashing the stock market, but socially-disconnected losers using their digital knowledge and lack of human engagements to stalk, threaten and harass. The jet-setting absurdity of Blackhat is laughable when compared to the real-life terrors of doxxing and "SWATing" - no murderous Hollywood bad guy could possibly be as unpleasant as spending a few minutes browsing 8chan. Eugh...

But anyway, this is the movie we're stuck with: Someone is using their leet skills to pull off a convoluted scheme only a little stupider than the ones from Superman III or Swordfish, and only Chris Hemsworth as history's buffest hacker can stop him. For awhile there's a running B-story about said hacker's friendly history with the cyber-detective from the Chinese side of the manhunt who seems to exist mainly to ensure that this film, like Transformers 4, can spend enough time in and around Beijing so as to look extra-appealing to lucrative Chinese ticket-buyers. Eventually it just boils down to a bog-standard romance between Hemsworth and Tang Wei as the guy's sister.

Let it not be said that Wei, a star in China making her English-language debut, isn't a bright light struggling mightily to stay afloat amid all of Blackhat's nonsense. The romance subplot never really goes anywhere interesting, but the details manage to avoid some clichés in welcome ways and you get the sense it's a pairing that might've really clicked given better material.

At least the whole thing is handsome looking, though how it could be anything but with Michael Mann at the helm is debatable to say the least. There's a surprise action-beat midway through that, if nothing else, briefly roused me from what was threatening to become a full-blown nap so I can give it that at least. Though it must be said, the best action beat the film has comes at the finale, where we finally drop all pretense that this is about hacking or technology and just let Thor take down the baddies in a brutal improvised knife fight.

Bottom Line: A depressing waste of talent and time.

<< Prev: Taken 3 - The One Where Liam Neeson Beats People UpNext: Paddington - Surprisingly Bearable >>
Stay tuned on Fridays for new episodes of Escape to the Movies.
Related to:
bob chipmanblackhatescape to the moviesmichael mannmovies and tvreview
0
Tweet