This colorful dystopian film by Terry Gilliam of Brazil and Monty Python fame is weird, but very unique. 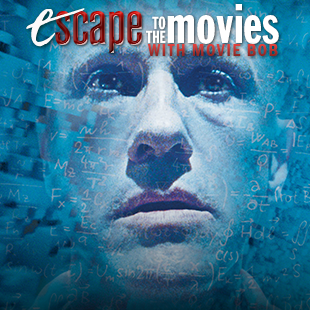 About three decades ago, animator and lone American member of Monty Python's Flying Circus Terry Gilliam went from auteur curiosity to a filmmaker of note almost overnight with his cult-classic Brazil, a dark sci-fi comedy that was as famous for its one-of-a-kind visuals and endlessly inventive direction as it was for Gilliam's battle with studio executives to get his preferred version of the film released to theaters with its brilliantly twisted true ending.

Set in a bizarre dystopian future, Brazil was an absurd escapist satire of the-present day corporate culture in which a daydreamer office-drone falls into a rabbit hole of adventure, paranoia and misunderstanding when he stumbles into conspiracy unleashed by a flaw in corporate machine in which he has always been a cog.

Gilliam has had his share of successes since then, but Zero Theorem represents the first time in three decades he's seemed to be directly revisiting the themes and ideas of Brazil in a new context.

Intentionally or not, Gilliam's tics and fetishes are so specific and his futurism so distinct that its almost impossible to read the film as anything but a Brazil for the 21st Century and the digital age. It presents a new but familiar dystopia where so much of human experience and interaction has been consigned to the web that no one seems to notice the physical world crumbling around them -- and where put-upon code-crunching tech-support workers, programmers and systems managers have replaced anonymous accountants as the new image of tragic, interchangeable corporate servitude. 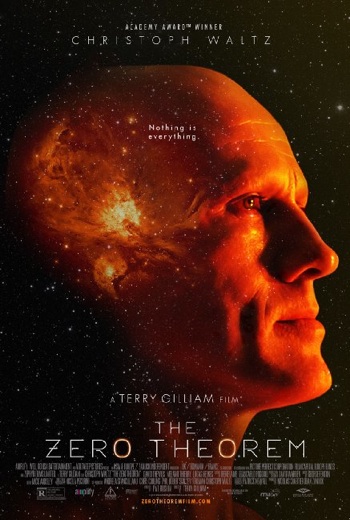 One such coder is Christophe Waltz as a Qohen Lett, a depressed and disturbed master coder living as a shell of a man after having awoken from what we're told was a prior life of addiction and hedonism. His main goal is to finagle a disability waiver so that he can do his coding from home -- the better to wait for a phone call he expects to come at any moment which will tell him the purpose of his life.

Speaking of coding: The film's visual centerpieces includes one of the most depressingly-plausible visions of what computers of the future might look like: Vertically-oriented monstrosities where keyboards have been replaced by tablet/controller hybrids and all activities from coding to surfing to communicating have been "gamified" into a nightmare cross between Minecraft and slide-puzzles.

What sets the film apart most from not only Brazil but most of Gilliam's other films is that it's clear almost immediately that the actual plot is secondary to the moment-by-moment vignettes -- an excuse to watch Waltz's decaying sad-sack shuffle through his failing world as a blunt caricature of our own. Y'know, in case the central presence of a zombie-like tech-whiz seeking to wall himself up at home and wait for someone else to hand him life direction was too subtle for you.

In what's technically the story proper, Qohen is granted his dream of telecommuting from home on the condition that he undertake his company's most difficult code-cracking assignment: Solving the so-called "Zero Theorem." This is a theoretical math equation similar to the "Big Crunch Theory" wherein 0 can be made to equal 100% -- thus empirically proving that everything adds up to nothing and thus life, the universe and existence itself are utterly meaningless. 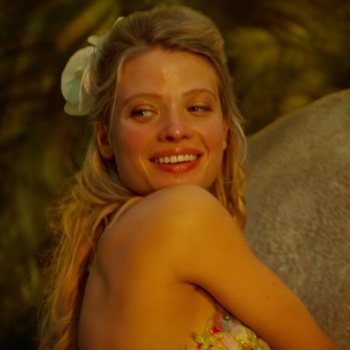 As he attempts to work out the problem, Qohen finds his life invaded by everyone from company thugs to middle-managers to his employer's tech-hotshot teenage son, some of whom claim to be able to help but some of whom also imply that proving the Zero Theorem could have disastrous and sinister consequences in and of itself. He also encounters Melanie Thierry as a mysterious woman who offers him escape into virtual romantic fantasies that he begins to believe could be made real.

Unfortunately, this character feels strangely retrograde and out of place in what's otherwise an exceptionally of-the-moment story: Trotting out the ancient geek-fantasy cliche of the benevolent lifecoach/lover/saviour girl brings to mind the most dated cliches of bad 90s cyberpunk rather than the mindbending post-digital ruminations that inform the rest of the story, regardless of how compelling Thierry is from scene to scene.

You also do start to notice how much budget constraints seemingly keep the action locked into a handful of admittedly impressive sets, with much of the film's scope noticeably described and suggested rather than shown. Still, it's a treat to see actors inhabiting Gilliam's trademark elaborate, detail-packed physical sets after the occasional greenscreen overuse that hampered The Imaginarium of Doctor Parnassus. The world feels small, but vital and lived-in.

I'm not sure Zero Theorem adds-up to the omniscient Last Word on techie-isolationism that it aims to be, but its fascinating filmmaker whose dogged refusal to stop plugging away at his own unsolvable puzzles has made him an idiosyncratic hero unto himself. The film has already run in various territories and film festivals worldwide and is currently playing on demand in the U.S. before a limited theatrical release next week. I'd call it worth checking out, if for no other reason that you won't see anything else like it any time soon.

<< Prev: The Giver - Don't Bother Giving This Movie Your TimeNext: The Maze Runner - Where's a Minotaur When You Need One? >>
Stay tuned on Fridays for new episodes of Escape to the Movies.
Related to:
bob chipmandystopiaescape to the moviesmovies and tvreviewterry gilliamzero theorem
0
Tweet