The Maze Runner starts off strong, but starts to fall apart towards the end. 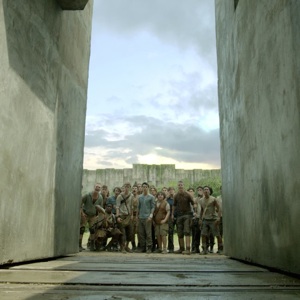 The Maze Runner is one of those movies where the seemingly snarky descriptive "good until it's not" really applies. It's a serviceable if unremarkable movie that works fine while its going, builds to the point wherein it could self-elevate to a place where it can either become something greater or fall apart... and elects to fall apart. Too bad.

Like seemingly every major release not based on a Marvel comic-book these days, the film is based on the first book in a young adult novel series that I have never heard of but is apparently popular enough to merit a feature adaptation and features teenaged characters maneuvering against a vaguely-dystopic science fiction backdrop that serves as a heavy-handed metaphor for adolescent angst.

The gimmick this time is that the cast is exclusively made up of young boys, and feels overall more explicitly male-targeted via a setup that eschews the sociopolitical hand-wringing of Hunger Gamesor The Giver in favor of focusing on the building, coordinating and solving of rule sets and logic puzzles. A lone female character is introduced to kickstart the third act, but her presence feels mainly obligatory in that she's likely more important in the subsequent books.

The main characters are a community of boys with no memory of their past lives save for their names who've established a functioning base-camp in a forest glade surrounded on all sides by a gigantic circular maze filled with cyborg monsters called "Grievers" from which there seems to be no escape. By the time our nominal hero Thomas shows up, any Mad Max or Lord of The Flies business seems to have gone down in the distant past, which means the story is more about a push and pull between a bad situation that's at least stable and the uncertainty of moving forward.

It's not a bad setup, even if the younger-skewing writing makes it way too easy to know which side the various characters will break down on and what the dynamics will be, but for the most part it's pretty engaging watching them gradually pull apart the reality of the maze and get closer to the truth of what's going on and why.

Unfortunately, the more we find out the less interesting things become, and by the time we reach our "to be continued" finale where everything is explained in the most rote way possible and the stakes/direction of part 2 are laid out... well, any interest I had basically vanished. 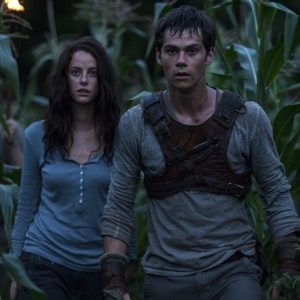 It's not so much that transitioning from a seemingly alien reality to something more recognizable and mundane is inherently a bad thing. There are several good films that have made that kind of switch into an ultra-effective gut-punch reveal. But Maze Runner has more in common with M. Night Shyamalan's The Village in that my immediate reaction was shock at realizing they'd gone for both the dumbest and most uninteresting "truth" I could think of.

The preceding film isn't great, but at least its fairly original. The story to come teased by its final moments, on the other hand, feels like something I've seen a thousand times before and have exactly zero interest in seeing again. But, maybe I'd feel differently if I was as young as the film's prospective audience apparently is... but I sort of doubt it.

Still, most of it is overall a lot better than Divergent or the first Hunger Games so at least there's that. I'm told that I'm supposed to recognize lead actor Dylan O'Brien from the Teen Wolf TV show but... to be honest, I'm not in middle school so I completely forgot that a Teen Wolf TV show was a "thing." He's... unremarkable but inoffensive, though I'm not really sold on the "next big thing" buzz that's accompanied both him, the film and the character to theaters.

Bottom Line: Well-meaning with a potentially interesting premise, undone (but not entirely) by the needs of franchise-teasing and a dodgy "surprise" climax.

Recommendation: We're still mired in the doldrums of early Fall, so by default this is one of the better things now playing for at least another week or so.

<< Prev: The Zero Theorem - Colorful, Fascinating and WeirdNext: The Equalizer - A Near-Perfect Dad Movie >>
Stay tuned on Fridays for new episodes of Escape to the Movies.
Related to:
bob chipmanescape to the moviesmovies and tvreviewthe maze runner
0
Tweet