The Equalizer manages to be fun despite its heavy-handed power fantasy premise. 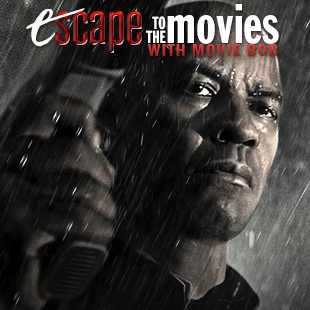 I think it's okay to admit that, even while the film was clearly telling you that living like the main character did wasn't good for you and would lead to unfortunate ends... You did kind of want to live (or at least party) like The Wolf of Wall Street did.

Well, good news! For the next few weeks, we all get to feel like Jordan Belfort. Not in the having his money, his drugs or his women sense, of course... but in the sense that your dad also probably won't be able to shut up about "the f***ing Equalizer!"

Yeah. As an adaptation, The Equalizer is so thinly tied to the already fairly-thin premise of the 1980s TV series you almost have to wonder why they bothered with the license at all. But as a work in its own right it's a near-perfect version of what I've started to refer to as "Dad Movies" -- hard bitten action dramas starring gracefully-aging older male stars as omnicompetent badasses who solve their problems through methodical masculine determination and nigh-superhuman fighting prowess implicitly the result of their life experience and having survived into the weak and wimpy present from an age When Men Were Men. See also: The Expendables, Jack Reacher and the recent filmography of Liam Neeson.

So it is with The Equalizer: It's absurdly violent, relentlessly forward moving, has the moral-complexity of a professional wrestling rivalry, the sole significant female character completely disappears from the film once she's done the work of having something bad happen to her to spur the hero into righteous action, it posits a semi-retired hardware store employee as an all-powerful action god and runs just too long enough to be a bit of a slog in theaters but exactly too long enough to make ideal Saturday Afternoon La-Z-Boy viewing -- "A Dad Movie."

As in the series, Denzel Washington's Robert McCall is a former high-level operative for an unnamed covert outfit implied to be the CIA or something similar now getting by as a seemingly-ordinary older gentleman in Boston who has sworn off violence and instead busies himself reading classic books and being almost cartoonishly generous in his willingness to help friends and coworkers with their various problems. But when he's witness to the beating of Chloe Grace-Moretz as a young Russian prostitute by her pimp, something in McCall snaps and a few scenes later said pimp and all of his associates have been brutally killed.

For a minute there, it looks like the film is going to take this in a much more interesting direction than it ultimately does: Though never explicitly stated, it's made bluntly clear through Washington's admirably-subtle physical acting that McCall is afflicted with fairly visible Obsessive Compulsive Disorder, and it's equally unmistakable that the film intends said affliction to actually be the source of McCall's superhuman skills and reflexes.

At the same time, the story also contrives to imply that, having had his killer-instincts switched back on, McCall can't turn them off quite as easily. And where he was previously being Mr. Helpful to everyone he knew by doing odd jobs or offering encouraging advice, he now elects to help by using his lethal skills violently correct anyone who gives his friends or coworkers a hard time. 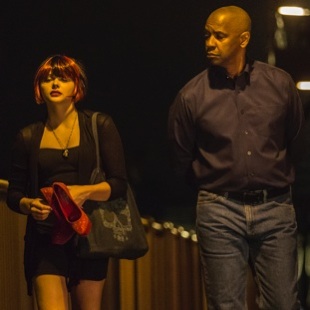 These are both interesting elements to explore, but they both get mostly sidelined for a more conventional setup: It turns out that McCall didn't simply kill a roomful of sleazy human-traffickers, he wiped out multiple major players of the East Coast Russian Mafia, whose big boss back in Moscow sends his top henchman -- a ruthlessly-efficient, satanic-tattooed, superhuman killing-machine played by Martin Csokas to rip the city apart with his bare hands in a quest to figure out who The Equalizer is and put him down...

...leading into an oddly deliberately-paced middle act where the evil multiple-murder and the... er... "good" multiple-murderer methodically hack, slash, bludgeon, strangle and shoot their way through various Beantown neighborhoods until their paths inevitably collide and, yes, The Equalizer must take on a heavily-armed mercenary squad by turning a Home Depot into his own personal R-rated recreation of Home Alone.

The whole thing is completely preposterous, but the ever-underappreciated direction of Antoine Fuqua keeps everything just far enough below the bar of outright "cartoonish" so as to make sure the film's target audience of insecure middle-aged men will feel zero obligation to irony whilst clutching their Budweisers and pumping their fists from start to finish in primal adulation of their new most-beloved self-affirming empowerment fantasy.

...it is pretty damn fun though, in spite of itself, as shamelessly-pandering power-fantasies often are. It's deceptively difficult to actually make one of these things work, and what Denzel -- like Liam Neeson -- brings is gravitas and commitment that plants its feet firmly and demands that the audience either take this nonsense seriously or at least be respectful of their elders while the rest the audience has its fun. And in this specific case it IS pretty interesting to watch a slow-building character-study inexorably morph into a bloodbath wherein a quietly-reserved avatar of humanized masculine-dignity is tossed into battle against a villain who could've wandered over from Santa Destroy.

Bottom Line: At the end of the day, most crowd-pleasing blockbusters -- which is most certainly what this Sandalwood and sawdust-scented tomfoolery aspires to be -- are cinematic junk food at the end of the day... The Equalizer just happens to be eschewing candy and milkshakes for soft-pretzels and a six-pack. I can think of worse things.

Recommendation: Good enough for what it is, but no classic. Worth it for content-starved action-lovers and Denzel fans.

<< Prev: The Maze Runner - Where's a Minotaur When You Need One?Next: Gone Girl - Fantastically Suspenseful Thiller >>
Stay tuned on Fridays for new episodes of Escape to the Movies.
Related to:
bob chipmanactiondenzel washingtonescape to the moviesmovies and tvreviewthe equalizer
0
Tweet