MovieBob takes a look at a mystery thriller that just may be one of the best movies this year. 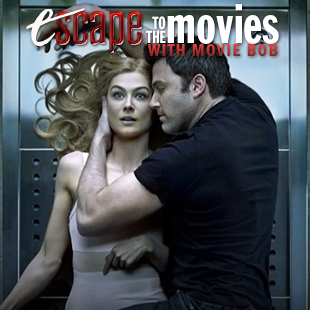 Gone Girl is a movie about surprises and things not necessarily being what they seem, and as a result is hinged on a series of escalating complications and reality-altering plot twists -- not just a "surprise ending" (though it certainly has one of those) but a major upending of what you think you know that comes in right at the middle.

But! I know how people are about "spoilers," so I'll give you the basic version here and then we'll talk about spoiler-stuff (though not the ending) after a warning. Alright?

So, Gone Girl stars Ben Affleck as a seemingly ordinary upper middle-class suburban guy named Nick whose wife Amy disappears under highly suspicious circumstances that make him the prime suspect in what starts to look like a murder investigation almost immediately -- and while he swears he didn't do it, the investigation leads to revelations about their marriage and his behavior therein that make him less and less sympathetic by the day. Since Amy's parents happen to be a pair of famous children's book authors whose popular character is based on her, the case gains national attention and places Nick under a media-microscope that threatens to convict him before there's even an arrest -- and that's before Nick begins to suspect that whoever took Amy is framing him.

It's a scathing, barn-burner deconstruction of everything from marriage to family to the sensationalist media to the legal system to a dozen other taboos, masterfully directed by David Fincher from the novel by Gillian Flynn. There's a great subtle turn from Ben Affleck and a career-redefining performance by Rosamund Pike as Amy. Hell, how good is this movie? Tyler Perry is in this movie... and he's actually awesome!

It's unquestionably going to end up being one of the year's most talked-about and insidiously excellent films, is an inarguable Fall must-see... and that's all I can say while being spoiler-free. Back in a bit...

SPOILERS FROM HERE ON OUT! 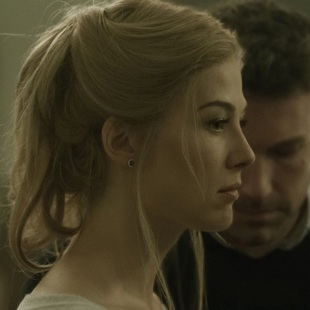 ...Okay! So here's why everybody was talking about this book and why they'll be talking about this movie: At the midpoint of the story, it turns out that not only is Amy not dead -- she's also not anything else either the audience or the other characters believed her to be.

What Amy is is a ruthless, highly-intelligent, cold-blooded psychopath -- who has gone to absurdly-detailed yet flawlessly-executed lengths to stage her own death and frame Nick for the murder as payback for... basically being a disappointment as a husband. Oh -- he's definitely unfaithful, a jerk and kind of a dumbass... but a lot of what we hear in the first half painting him as a potential monster turn out to be lies sprinkled into the narrative by the real monster he was married to.

The film then shifts gears into being Amy's story, as we watch her justify her behavior and power through the remainder of her scheme in a set of adventures that reveal her as human and not quite invincible... but still possessed of a superhuman survival instinct that makes her unimaginably dangerous to anything that gets in her way. It builds up to a finale where... well, you'll have to see for yourself.

Here's the thing: Yeah, "Amy is evil" is a great twist... but in a lesser movie that's all it would be -- a fun gotcha staged to turn a quintessential "airport book" potboiler into something resembling a deconstruction of its own genre. But Gone Girl -- like Fincher's other lurid, twisting thrillers before it -- is interested more in the ramifications of a plot-turn than the momentary shock it can produce. And in this case those ramifications are the questions it raises about the world around it: Amy is nuts, but is she really "that" nuts? In the context of the grim, nihilistic image the film paints of present-day upscale middle-American existence, does being psychotic necessarily make her that much of an "aberration?"

In one of the Pike's best moments in the film, a longform soliloquy detailing the insane lengths she's gone to to stage her murder segues seamlessly into a breakdown of the lengths she and other women go through in terms of grooming "public face" performance in order to be catch the eyes of even just a decent-looking lunkhead like Nick in a way that makes the two feel about equal in their respective absurdities. Hell, is there even that much difference Amy effectively pretending to be a human being and her and Nick both (along with thousands of other similarly-miserable couples) going through the motions of a "happy" small-town all-American nuclear-family marriage when they are so clearly not built for it?

After all: The key element to Amy's plan (and several other plans we either see her execute or learn she already pulled-off) being successful is the notion that Nick's very real failure to live up the ideal of a Perfect Husband adds to appearance of his guilt, and supporting characters like Tyler Perry's media-savvy defense attorney and Missi Pyle as a Nancy Grace-inspired tabloid television scumbag hammer home the film's bitter view of modern life as being based so much on performance and manipulation and false-faces to prop-up untenable ideals, crumbling superstitions and imploding, obsolete social-structures... that just the day-to-day routine of keeping up the ACT makes sociopaths of us all.

Gone Girl is dark, nasty, lurid, just a little bit trashy and -- when you start tugging at the seams of internal logic -- utterly preposterous thriller of the most ridiculous caliber. But put it in the hands of this director and these actors and what you get is something wickedly entertaining... especially in the way Pike digs so deeply into Amy's horrifying yet disturbingly relatable pathology that you might find yourself kind of rooting for her to get away with it; or the way Affleck never lets you feel that bad for Nick, or how Neil Patrick Harris turns a small but pivotal role into something instantly memorable.

This is a hell of a movie and a great start to the Fall Movie season. Don't miss it.

<< Prev: The Equalizer - A Near-Perfect Dad MovieNext: Dracula Untold - AB Negative >>
Stay tuned on Fridays for new episodes of Escape to the Movies.
Related to:
bob chipmanben affleckescape to the moviesgone girlmovies and tvreviewrosamund pike
0
Tweet