Dracula Untold is a bad movie that could almost have gotten away with it. 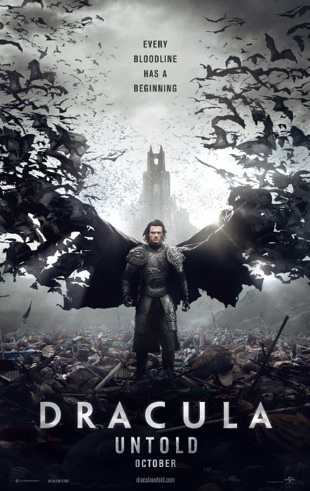 Dracula Untold is a bad movie -- you're shocked, I can tell -- but it's almost a bad movie that could've gotten by on charm. It's exactly earnest and unpretentious enough to be hard to hate even as it's simultaneously easy to dislike. It has a pulpy, "what you see is what you get" sincerity about its dopey presence thatm with just a bit more style or, failing that, a lot more blood, lust and... well, bloodlust than its baffling PG-13 rating will allow, it might've made for an enjoyable early-October distraction.

The setup here is a very, very, very heavily-fictionalized retelling of an early-1460s military victory of Vlad the Impaler of Wallachia (the historical figure on which Brahm Stoker loosely-based Count Dracula) over the invading armies of the Ottoman Sultan Mehmed III... with supernatural elements added on top of the fictionalization in order to allow the film to function as an origin story wherein Vlad attains vampiric powers and becomes the legendary Dracula.

I don't know exactly how this project came together, but it's amusing to imagine a plucky screenwriter deep in the bowels of the Hollywood machine happening by chance across Vlad of Wallachia's Wikipedia page and learning that he'd gained his main non-impaling-related notoriety as a minor-monarch who none the less managed to stifle the much larger, much more well-armed invading forces of a Sultan's empire... then excitedly calling up every director and producer he or she knew with a pitch: "Dude! Dude! Imagine 300... but with DRACULA!!!"

And yeah, that's not exactly a bad idea as tacky B-movies go: A horror/fantasy/superhero/medieval-war flick -- hell yeah, I'd have said yes to that too! I... also just might've asked that they pick one of those four genres to actually do well by in the course of mashing them all together into what ends up being kind of a bland cobbler of a film.

The "big idea" in this version is that the source of Vlad's famously-cruel treatment of his enemies and bitter resolve to resist Ottoman incursion is related to heavy, long-term post-traumatic stress from having been a child soldier during the time that he was (historically) a "royal hostage" of the Ottomans in boyhood. When The Sultan shows up again demanding that Transylvania send a thousand new children to be made warriors of, and when Vlad violently refuses the Ottomans invade full-force in order to teach him a lesson. 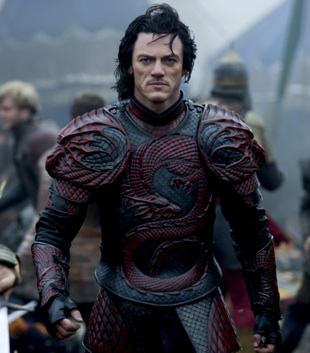 Vlad (Luke Evans, by the way -- still looking the role that finally makes a movie star out of him) decides that his only hope is to enlist the aid of a centuries-old but enormously-powerful vampire whose presence in Transylvania he'd recently discovered. But instead of just lending a hand, said vampire offers Vlad a vampirism "starter kit" with suspiciously plot-convenient strings attached: He'll get to be vampire with all the usual powers and weaknesses, but only for three days. After which he can be human again... unless he gives into temptation and drinks some blood, which will make his powers and his curse eternal.

Gee, I sure hope that -- assuming he can beat the Sultan in under that timeframe -- no unseen complications arise on day 3 that would force Vlad to choose between saving his people and/or a loved-one and retaining his humanity, huh?

Yeah. It's all pretty dumb, but as excuses to stage scenes where a tormented hero single-handedly takes down entire battalions using super-strength, super-healing and the ability to transform into and/or control giant swarms of bats? It does the job, and it has a decently gloomy gothic atmosphere that probably would've looked more interesting had Maleficent not done all of this business so much better this past summer. Evans has the right blend of old-school dashing swashbuckler appeal and modern action-hero chops for the role, while Dominic Cooper is game for the ceaselessly silly bad-guy role as the Sultan.

Sadly... the film just never takes off like it should. The whole premise begs to be much more violent, much sexier and much more over the top in general than it overall does. It also feels strangely truncated, with lots of supporting characters who seem to have identities and backstories left on the cutting room floor perhaps along with all the missing bloodshed -- the film has also, apparently, been altered by the presence of new scenes (possibly) meant to leave the door open for Evans' Dracula to step into the role of the Dracula in Universal's upcoming "shared-universe" of classic monster reboots.

Bottom Line: Inoffensive but also unmemorable, Dracula Untold should probably never have risen from the tomb.

<< Prev: Gone Girl - Fantastically Suspenseful ThillerNext: Fury - Tank You Very Much >>
Stay tuned on Fridays for new episodes of Escape to the Movies.
Related to:
bob chipmandraculadracula untoldescape to the moviesluke evansmovies and tvreview
0
Tweet