Fury is a good, brutal war movie that breaks the mold. 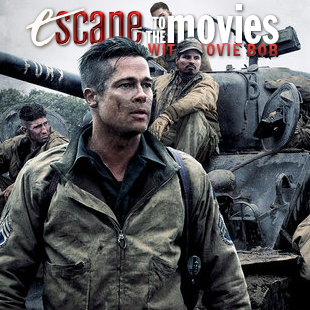 Among a certain strata of present-day film critics, the term "guy movie" is pretty-much synonymous with "bad movie." It's not fair, but it's not entirely surprising -- for a looooooong time men were presumed to be the biggest and most profitable audience, so that's who the most cheap, extraneous, quick-buck, disposable junk got made for because you were most likely to turn a profit. That's the entire basis on which the careers of Chuck Norris, Jean Claude Van Damme and Steven Segal were all built.

And yes, the target-audience for "guy movies" can be a bit... hard to take, especially since the genre has headed more and more in the direction of bitter resentment in recent years as the outside world seems to move further and further away from it. The question becomes: Can you make a good "guy movie?"

Not a good "parody" of guy movies, not a good "deconstruction" of guy movies, but an actual good movie that drips testosterone, blood and motor-oil while being all about men, men's psychology, male relationships, etc? Sure! And right now one of the best people in the business at doing just that is writer/director David Ayer, whose films frequently depict savage, angry, unapologetically-brutal characters but also ask: "Does that mean they weren't also people? That their stories don't get told?" His latest is Fury, which stars Brad Pitt and a tank.

Fury takes place at the end of World War II. The war in Europe has been won, everyone knows it's just a matter of time before Hitler goes down one way or another, there's NO chance Germany is gonna get back on the board... but the Nazis haven't officially surrendered yet, so the Allies have to trudge through enemy territory, going through the still substantially-dangerous motions of taking towns, fighting the last legs of resistance and just "making it work" until the guys upstairs say "okay, you don’t have to kill anybody anymore."

Fury is the name of a Sherman Tank commanded by Pitt as Sgt. Don "Wardaddy" Collier, but the nominal lead and audience-POV character is Logan Lerman as a young private who's managed to go the whole war without seeing combat as a typist who finds himself forced to become Fury's new gunner against pretty much everyone's wishes including his own. The film follows him as he gets to know Wardaddy, Gordo, Coon-Ass and Bible as they push Fury through the bloody, muddy, nasty final miles of the invasion. 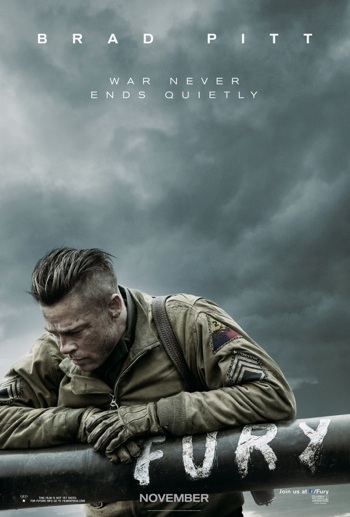 This is one of those movies that practically relishes being made out of formula World War II clichés because of all the fun it can have subverting and flaunting them. You've seen this scenario, these characters and this story dozens of times before, but you haven't seen it presented quite this way: Harsh, unforgiving and completely unconcerned with the commitment to old-fashionedness that permeates most films about this particular war.

Patriotism, nostalgia and righteousness are out the window from the get-go: These aren't the guys "defeating" evil, they're the guys kicking evil's teeth in after it already lost. And they sure as hell aren't a bunch of noble go-getters who can't wait to evolve into saintly grandfathers -- they're just guys doing a dirty job because it's their job. Fury's crew aren't "lovable jerks," they're just kinda... regular jerks, who happen to be the good guys. While the period detail is all predictably on-point, it's paced, directed, shot and scored like a hard-bitten, high-energy modern action movie. And while Lerman's character does go through the expected evolution via Wardaddy's tutelage... it's not so much a "boy becomes a man" story as it is a case-study in how war is practically designed to turn ordinary people into psychopaths.

I like that it's as dark as it is, but I almost found myself wishing it were darker in some respects. It's more than willing to go all the way with its depictions of battlefield horrors and man's inhumanity to man, but it feels like there's been some dialing-back in certain key scenes as to what really tends to go down when an invading army captures a civilian area -- good guys or not. Instead we get some quiet pseudo-domestic cooldown scenes that tell us interesting things about the characters but don't feel as 100% real as the rest of it.

Still, Fury is a hell of a good war movie, full stop. The tank-to-tank battle scenes are very possibly the best ever filmed, the simply-drawn but well-acted characters work -- yes, even the one played by Shia LaBeouf -- it's raw, real and utterly thrilling and yeah... at this point Brad Pitt is the best in the business at playing flawed, identifiably human versions of old-school American Hero archetypes. And it's always nice to see Michael Pena in things.

Bottom Line: I don't know that Fury is any kind of masterpiece, but it works like hell and it's a damn good, nasty little action film. Sometimes, that's enough.

Recommendation: Assuming you're all caught up, this the best new action film currently playing. Worth it.