Never mess with a hitman's dog. 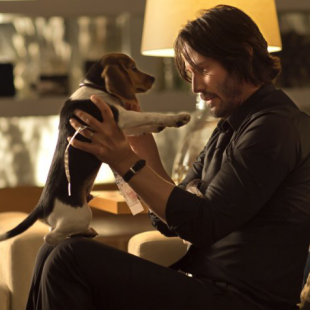 John Wick has a setup so simple you almost miss what an ingenious inversion it is: It's essentially a slasher movie turned inside-out, with the good/evil vectors inverted and guns swapped out for blades - most of the time. The premise? A group of young punks (led by the son of a powerful Russian mobster) break into a seemingly ordinary guy's house to steal his car, and in the process they kill his dog. As it turns out, this was the last guy they should've messed with: He's actually John Wick -- the world's greatest (though retired) hitman -- and now they're all going to die for it, one by one.

The film is, proudly, "just" a 90s-style "unstoppable badass" actioner, but in terms of its goals and aspirations you could probably teach a class around the way it worldbuilds without needing anything in the way of flashbacks or overwrought exposition: It constructs a vaguely fantastical organized-crime universe with its own densely-realized locales, personalities, rules, calling-cards etc and lets their use in the story explain the who's, what's and why's. The characters are defined entirely by action and by what they say about one another; which is a nice way of saying that for a change having everyone talk to everyone else about what a stone-cold amazing hardcase the hero is actually works in this one. 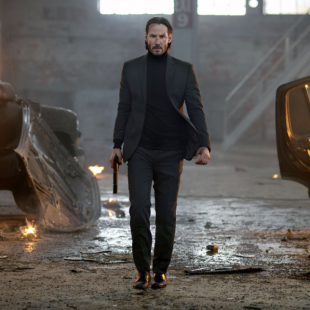 A lot of that has to do with the casting: Haters, as they say, are gonna hate, but I've always liked Keanu Reeves and I'm always glad when he turns up in a project like this. Whatever else you may think of his "range," he's really good in this sort of role and at this point he's so iconic as a movie star it adds meta-textual weight to the character's "You kids have no clue who you just messed with!" presence in the story.

That goes double for character-actor mainstays like Willem Dafoe, Ian McShane, Adrian Pallicki, Dean Winters, Kevin Nash, John Leguizamo, Jason Isaacs, Michael Nyqvist and others, whose roles are all beefed-up and imbued with the familiar aura of the presence -- these are folks who fill in half their own backstories just by showing up. I sometimes like to describe iconography-heavy movies like this as being a really elaborate domino setup: You can tell from the outset what it's supposed to "do," the thrill is in watching the pieces all fall and hope the timing is right all the way through -- and John Wick knocks over the dominos with expert efficiency.

Bottom Line: It's the best action film of its kind since Punisher War Zone.

<< Prev: Fury - Tank You Very MuchNext: Ouija - Just A Lame Cash-In >>
Stay tuned on Fridays for new episodes of Escape to the Movies.
Related to:
bob chipmanactionescape to the moviesjohn wickkeanu reevesmovies and tvreview
0
Tweet