MovieBob isn't quite sure why they needed to split this movie into two parts, but is totally ready for the second half. 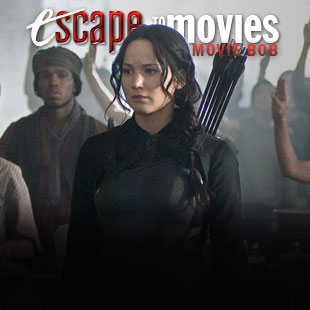 So. I appreciate the meaning of Suzanne Collins Hunger Games series in the popular culture. I appreciate that Katniss Everdeen is a very, very important figure of modern literature, in that she serves as a rare well-rounded, unconventional female protagonist and a superior role model for young women particularly in comparison to previous Young Adult heroines like the much-maligned Bella Swan.

I further appreciate that the books' overriding theme of encouraging young people to both question and learn to manipulate to their own advantage both media and the role of manufactured media-narratives in their own lives is of inestimable importance to a generation growing up in a wired, information-saturated world. And I absolutely understand and -- yes -- appreciate the point of view held by many that the sum total of these positive aspects of the broader franchise are ultimately of greater importance than whether or not the Hunger Games movies have been, thus far, a little lackluster.

Look. I keep waiting for Hunger Games franchise to click for me as movies. I understand the meaning and popularity of the books, I get what its iconic heroine means to a generation of young female readers and I think it's just ducky that a major movie franchise is teaching a generation of kids to be suspicious of media, authority figures, class conflict and top-down economic systems. Seriously, that's all great.

But the movies, taken on their own AS movies, have all come off like half-measures to me: The first film is marred by bad direction and an ongoing poor choice in robbing the main character of a vital interior monologue from the books. The sequel is better, but squanders a fresh twist on the premise in favor of sitting around reiterating character business we already knew. Now we have Mockingjay: Part I, which dilutes a little over half an hour's worth of actual interesting plot and visual ideas into near-nothingness by spreading them thin in order to get a whole movie out of setting the deck for Part II.

For those coming in late: The series is set in the fictional dystopia of Panem and chronicles the escalating conflict between the oppressive Capitol -- where everyone is foppish and fey and therefore EVIL -- and the oppressed Districts -- where everyone is scrappy and noble and blue-collar and therefore JESUS. The Capitol maintains order through a televised bloodsport called The Hunger Games, but met its match when Jennifer Lawrence's longbow-savvy Hotchkiss NormaJean figured out how to work the media-machine to her own advantage.

As Mockingjay opens, Cutlets has discovered that her elevation from the gladiatrix equivalent of an American Idol fan-favorite to the icon of a mass anti-Capitol uprising was largely being stage-managed by a rebel underground that is now poised to launch a full-scale war against Donald Sutherland as the strangely boring villain in charge of the whole mess. With no more Hunger Games to survive, Cheesenips' fight this time is internal: having already been physically and mentally broken twice by one propaganda machine, can she summon the will to do it again for an insurgent media-campaign on her own side -- which is convinced that it can unite The Districts into a formidable revolution if she'll submit to being remade as said revolution's one-woman battlefield pep-squad. Y'know, in case the "Girl On Fire" nickname was too subtle of a Joan of Arc allusion for you previously. 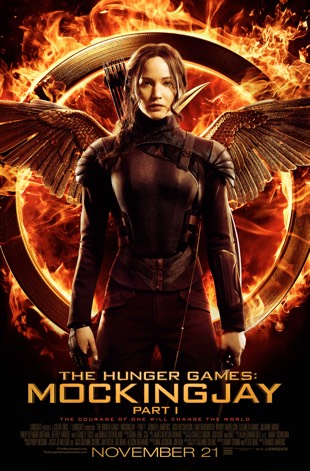 On the upside, this is a lot of the meat and potatoes that I'd been wanting to get out of the previous films. While the characters' emotional and physical journeys should ideally be front and center, I'd consistently found myself wanting to see more of the selfie-generation propaganda war that was the subtext of the first and second film but is the text here, and it's a welcome change.

Watching the Revolutionaries (under advisement from the late great Philip Seymour Hoffman as PlutoNash SpellingBee) cynically transform our beloved scrappy Codfish Halloween into a something like a dystopic superhero complete with black-rubber Batman armor and tacky green-screen effects as an ironic mirror to the dress-making/training montages from the earlier films is really solid, interesting stuff. And it gets even better when The Capitol wheels out a seemingly-brainwashed shell of our heroine's love-triangle buddy Petrol Malomar. That's some sharp, cutting emotional/narrative stuff right there, even if it means having to swallow the idea of a supervillain's master plan being contingent on the mass appeal of... Josh Hutcherson.

And a big setpiece sequence where Catscratch and Discount Thor get into a ground-to-air battle wherein our heroine transforms into her Mockingjay "symbolic self" for real is at once the best action scene and probably the best dramatic scene of the entire series to this point. And I really dug the two bravura scenes where the on-the-ground revolutionaries get about the nitty-gritty legwork -- good to finally see some of that.

Unfortunately, all this good is stretched so thin it's practically transparent, as the entire production has been streeeeeeeetched to the point of breaking in order to justify chopping the final installment in half. I get it: This is the only way to get one more movie without watching for Collins to write another book and I'm sure the plotting is dense enough to support... but it feels like there's a great short film here that's been lessened by dragging every damn thing out -- even a cute little moment where Catfish finally bonds with her family's obnoxious cat -- to the point of absurdity.

On the plus side, it has a really killer ending it's definitely the most interesting -- if not exciting -- entry in the series thus far, and yes... even though I wouldn't call myself "sold," I'm onboard: I'm excited to see how this ends now.

Bottom Line: Like I said -- I'm onboard, I want to see where this is going.

Recommendation: Solid action, but not enough for audiences who aren't fans of the series.