Well the Hobbit trilogy is finally complete, but was it worth stretching into three films? 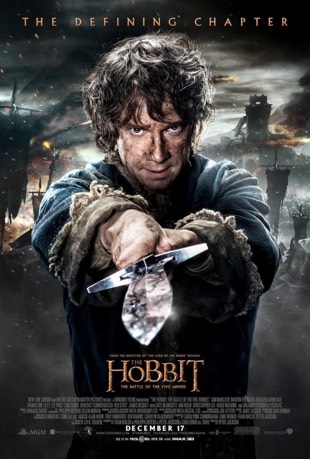 The big question hovering over The Battle of the Five Armies, for me, was whether or not the film would "stick the landing" -- by which I mean, will this be the installment of this (when you think about it) pretty circumstantially strange prequel trilogy that brings it all together as something more substantial than Peter Jackson and company taking a Tolkien fan-fiction "victory lap" in the form of a loose inflating of the Middle-earth maestro's much smaller, much simpler earlier book?

And the answer, at long last... is no. Not really. With all said and done, The Hobbit trilogy was simply not as good as Lord of the Rings. It's not as rich of a narrative, it's not as complex of a work, it's not as deep or meaningful or even as well-executed. Here, at the end of all things, this prequel saga turns out to be what it looked like from the beginning: Jackson getting the band back together for a "greatest hits" tour on behalf of the New Zealand Board of Tourism and taking the opportunity afforded by the comparative lightness of the source material this time around to stretch it out and experiment with all the visual gags, weird narrative digressions and big, elaborate kitchen-sink action sequences that wouldn't quite have fit in around the already tightly-packed edges of the previous trilogy.

In fact... yes, it must be said that this is the Middle-earth film that -- more so than any of the others -- finally diverges so profoundly from the original tone and even intent of Tolkien's work as to become effectively an almost completely separate work. Granted, it feels like more of a circumstance of adaptation than an act of willful editorializing: The fact is, The Battle of Five Armies was an ironic coda to Tolkien's book -- an illustration of the foolishness of squabbling over treasure and territory with "honor" and allegiances changing course on a dime in contrast to his idealization of the rural English middle-class as embodied by the Hobbits.

Jackson's film, on the other hand, aims to actually stretch the build-up and execution of the battle over the course of an entire film, along with placing it in canonical context with the bigger picture of Middle-earth Tolkien later expounded upon in LotR. That means laying out the strategic and tactical reasons for this particular mountain keep to be of interest to Sauron's Orcs and Goblins, along with fleshing out the motivations of the armies of Elves, Dwarves, Humans and even Eagles beyond their role in the books as class-conscious caricatures. As a result, what in the book reads fairly deliberately as a catastrophe of tragic absurdity instead can't help but play out as still tragic... but also peppered with moments of nobility, heroism and meaningful action. 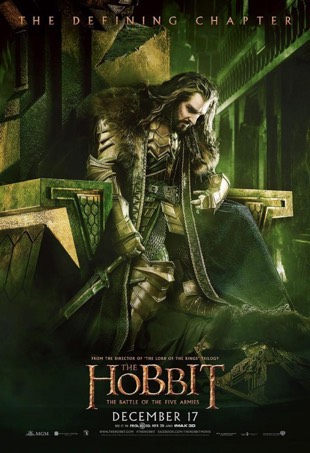 To put it another way: Tolkien's book is often cited as being a quintessential anti-war tome, but Jackson's movie... seems to feel differently, alternating between "War is bad, but necessary for the right reasons" and "War is AWESOME!!! Look at all these sick-ass monsters and stuff! Giant worms! Trolls! That dude's riding a pig! Woohooo!"

I get that to some folks that amounts to a betrayal of the books and even "selling out" of the weight and dramatic import cultivated by the original trilogy. And maybe it is. And I'm certainly not going to act like this trilogy is anything much beyond a theme park ride -- complete with adrenaline-focused pacing and a heavy emphasis on fan-service. The thing is... when I sign on for a Peter Jackson joint, that's a lot of what I hope to get.

See, while I know most of the world first encountered this goofball Kiwi mad-genius through the Lord of the Rings... I was onboard, well... yes, "before it was cool." And the Peter Jackson I first became a lifelong fan of was an unhinged, barely restrained purveyor of over-the-top action/horror hybrids that succeeded by throwing every damn thing they could onscreen with as much joy and energy as possible -- even when "every damn thing they could" was limited to buckets of special-effects blood and a truckload of Halloween props.

So the prospect of seeing that same gonzo, go-for-broke filmmaker -- after showing so much admirable and well-placed restraint on Lord of the Rings -- decide to cut loose and go hog wild with all the toys and tech he still had lying around on a canvas with a near-limitless budgetary scope? Yeah, that sounds like a hell of a party to me!

And while you can call The Hobbit trilogy a lot of things: Bloated, melodramatic, unapologetically goofy and -- perhaps most damningly of all -- unnecessary... I can't deny that they're a lot of fun, and in that respect the near wall-to-wall multi-front fantasy battle sequence that comprises this final installment is the perfect way to wind things down. How can I NOT at least give a little bit of love to a movie that opens with a gigantic Godzilla-scale action sequence built around a giant dragon... and then goes "Wow, that was pretty cool, huh? Okay, well here's the actual rest of the movie!" 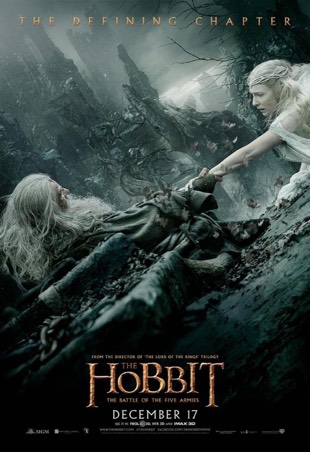 And does the film really "need" a scene of Elrond, Galadriel and Saruman rolling up the Middle-earth Expendables for a completely-contrived brawl with the Nazgul? NO! It's ridiculous and almost-entirely extraneous to plot -- a complete and unabashed moment of fan-service through and through... but it sure was cool, and I'm glad I saw it.

And besides, even though the big crazy setpieces are the stars this time, the dramatic business still acquits itself admirably. In a weird way, Martin Freeman's ability to drift into the background for big stretches -- until he doesn't -- makes him an oddly ideal Bilbo Baggins, and while I think it's a mistake that some fairly-important character development for Thorin Oakenshield happens seemingly offscreen, Richard Armitage has made the role his own and shines in easily one of the best one-on-one fight scenes of the franchise. And yeah, I know a lot of people really hate the Legolas/Tauriel/Killi side-story... but you can't say the actors don't give 110% to it.

What's the legacy of all this, then? Hell if I know. I had fun with the series, and that it was goofier than a lot of people wanted and not the equal to its predecessor doesn't do any real damage to Lord of the Rings as far as I'm concerned. I had fun with the first two, I had fun with this one, and this time of year a little lighthearted stress-relief with a cast of old friends is sometimes what you need.

Bottom Line: Not the epic we wanted, but probably the Holiday box-office amusement we need.

Recommendation: Worth a theatrical viewing, but avoid those HFR showings just like with the last two.

<< Prev: Exodus: Gods and Kings - The 11th PlagueNext: American Sniper - An Empty War Film >>
Stay tuned on Fridays for new episodes of Escape to the Movies.
Related to:
bob chipmanescape to the movieshobbitjrr tolkienmovies and tvpeter jacksonreviewthe hobbitthe hobbit the battle of the five armies
0
Tweet