American Sniper is a matter-of-fact war film to a fault, lacking any central point. 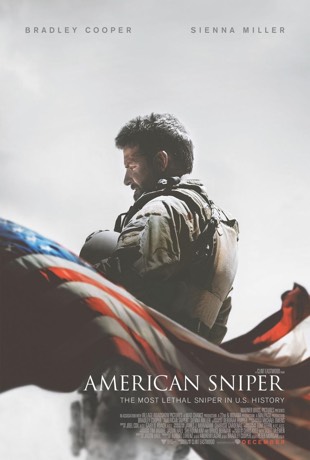 I've got a serious question to ask -- and it's not really a super-uplifting question, so I feel kind of bad about posing one damn day after Christmas, but... release dates are release dates. Anyway, my question is... has it been long enough, yet?

And yes, given the subject matter, I'm talking about 9/11 and its aftermath: Has it been long enough? Not to "forget," not to be "numb," not to be "cynical" or snarky or dismissive or push it into the background of one's mind or anything like that. Has it been long enough that it's no longer blasphemy or even overly-controversial to look at a piece of art grounded in real-life events spinning directly out of the aftermath of that fateful day -- the wars, the politics, the cultural changes, the new perspectives, a new generation of American war veterans, everything else... and admit it if said piece of art kind of sucks?

Well, I hope so -- because American Sniper kind of sucks. Sorry Clint.

What sucks more than movie, though, is the way the cultural and emotional deck seems to be stacked against saying so. Not necessarily by design -- whatever director Clint Eastwood's real-life ideological eccentricities, he's nobody's propagandist -- but by simple circumstance. Here's a movie about a guy who's life story and tragic death read like a TVTropes page of Patriotic Movie Hero long before anyone considered making a film about it, played so earnestly that one can't help but feel some level of consternation about recognizing how little in the film works. The film is so matter-of-fact and devoid of nuance or thematic depth in its presentation of the late Chris Kyle... how can you pan it without seeming to unintentionally pan the life it's based on?

If you were unfamiliar with his story, Chris Kyle was a former rodeo champ who signed up for the Navy SEALs in his mid-20s and wound up as a sniper in the Iraq War. He eventually racked up a succession of important kills, life-saving rescues and impressive long-range shots as to establish himself as the most lethal sniper in U.S. History and, however briefly, the entire world. Retiring from combat in 2009, he transitioned into a new role as a counselor to fellow veterans suffering from Post-Traumatic Stress Disorder... an endeavor which ended in tragic irony when he was murdered by an unstable fellow veteran he had invited to a gun range for stress counseling.

And now that I've told you those facts and/or invited you to just read the autobiography that the film was based on... there's basically no reason for you to watch American Sniper, because that's all the film offers: A succession of events that happened to and around Chris Kyle, presented matter-of-factly and assembled into the generic beats and rhythms of an action movie. He makes friends, loses friends, makes shots, loses shots, encounters enemies, clashes with rivals, argues with his wife about his constant re-enlistments, retires and dies offscreen... with the film not even attempting to offer a coherent perspective on the man, the meaning of his life or even a discernible viewpoint on either the 9/11 tragedy or the wars that came out of it.

That kind of "just the facts" boilerplate is vintage Eastwood -- the calling-card of a filmmaker who eschews over-visualized compositions or flowery introspections at the screenplay level. And a lot of the time it serves him well. But here, presented with a story so sadly typical of modern war narratives and a protagonist so inscrutably "arch" in terms of onscreen presence it makes the proceedings feel empty rather than clean and clear.

Now, I understand the instinct that says that Chris Kyle's story is a fairly straightforward one. That, by all accounts, he was a guy who genuinely believed in the basic moral good of using his exceptional marksmanship to protect his fellow soldiers from harm and that he apparently was not one for being especially introspective or critical when it came to the righteousness or lack thereof of the U.S. military response to 9/11 up to and including the Iraq War. And that projecting some kind of exploratory meaning, message or "point" that he's not alive to opine on or respond to is in some way disrespectful. I understand that... I just don't agree. 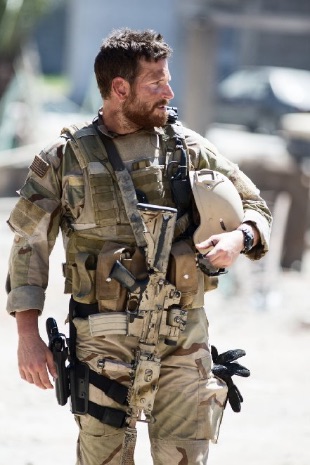 Here's the thing: I think a largely context-free, uncritical, "just the facts" film about Chris Kyle could easily be an interesting record -- as a documentary. But the only documentary footage in American Sniper comes during the end credits, and it's footage of his memorial service. Everything else is a cinematic recreation, which means that however true the history is, it's still to a degree a fictionalization. That's not Chris Kyle, it's Bradley Cooper. This isn't real war footage, it's sets and costumes and special effects. And since a film inevitably has to make decisions regarding which events to depict and which events not to in the name of dramatic license to create a cinematic narrative... well, then it's ceased to be about "facts" and has instead become about story -- and stories generally have to have a point.

And American Sniper doesn't really have a point. Or even much on its mind, which is just bizarre considering the weight of the setting and subject matter. Is it pro-war? Anti-war? Ambiguous? It doesn't really seem to know or care. It zeroes-in -- out of all the action Kyle saw -- on his obsession with taking down a terrorist maniac who tortures children with a power-drill, keeps a bakery full of human body-parts and in general acts so cartoonishly evil he should've pledged COBRA instead of Al Qaeda... but despite giving Kyle a super-villain to fight stops short of making him a super-hero.. But it's also reluctant to allow any hint to creep in that the war isn't the most noble endeavor in history, even as Kyle grapples with PTSD and torments his long-suffering wife by obsessively re-enlisting. Even a running B-story about his rivalry with an equally-superhuman sniper on the enemy side is profoundly underdeveloped, coming and going without much structure.

And even if the film was. "just" about Chris Kyle, it doesn't have anything to say about him either. It offers no opinion, perspective or even exploration of his psyche, his viewpoint, even just his feelings about the extraordinary life he wound up living. American Sniper let me spend two hours and ten minutes with its lead character, and the closest thing I could discern to an "arc" in his story is that his father gave him a stern talking-to at breakfast once when he was a kid... and because of that he somehow gained nigh-superhuman sniper powers.

I'm aware that some folks will see this as me being upset that the film doesn't take an "anti-war" political stance, but the plain fact is that the film hasn't got a coherent political reach in any direction. And it's bizarre that this movie about the true story of a guy who in archetype and in deeds resembled a quintessential All-American Hero has less on its mind about war, terrorism and the lives of veterans... than the made-up story about the funnybook hero who actually WEARS an American Flag.

<< Prev: The Hobbit: The Battle of the Five Armies - There and Back AgainNext: The Interview - This Is What We're All Getting Worked Up Over? >>
Stay tuned on Fridays for new episodes of Escape to the Movies.
Related to:
bob chipmanamerican sniperbradley cooperclint eastwoodescape to the moviesmovies and tvnavyreviewsniper
0
Tweet