Don't get Taken in by Taken 3. 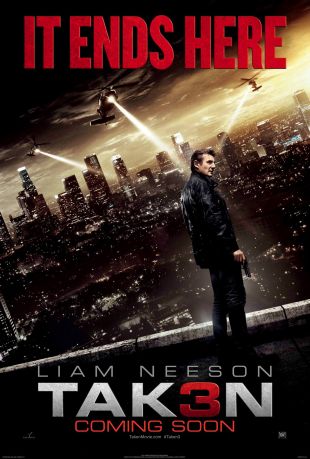 Alright. So, my commitment to journalistic ethics requires me to inform you that I am presenting only a partially informed review of Taken 3; the reason for that being that the movie was really, really boring and I'm pretty sure I zonked out completely somewhere in Act 2. So, hypothetically, there could've been a point somewhere in there where the movie got really good for a little bit and I missed it. I kinda doubt that, but it's theoretically possible, so I guess you should take what I have to say with a grain of salt.

Remember when it was a novelty that Liam Neeson was doing movies like this? When the whole HOOK of the original Taken was "Hey, check it out! We hired freakin' OSCAR SCHINDLER to do a bunch of dopey Steven Segal stuff all over France, isn't that nuts?" Now that being Mr. Gracefully-Aging Action Dude has sort of become the main thrust of Neeson's onscreen persona, the franchise just doesn't seem as interesting outside of how weirdly retrograde the whole setup started out and now keeps going.

In case you forgot, the premise of the original Taken (which, if you were curious, does still hold up strictly on action movie terms) wasn't merely that the seemingly random American girl kidnapped by human traffickers turned out to have a dad who was secretly a super-dangerous ass-kicking spy - it was also that Neeson's character was an estranged First Husband who had advised his ex-wife against letting their daughter take a European trip unsupervised in the first place.

So basically, if only those foolish women had just taken his advice... and not left him for a wealthier and more stable guy... and pretty much had just accepted that Father Knows Best especially when Father is also a simple-living old-fashioned red-blooded Man's Man... everything would've worked out okay for them. That's basically the underlying appeal of the whole Taken franchise: The universe conspires, in form of Scary Foreign Terrorist Types, to teach the ungrateful women in our hero's life how desperately necessary his presence is.

And hey, that's fine - grumpy deadbeats whose favorite pastime is complaining about their alimony payments deserve escapist empowerment fantasies too, I guess. And like I said, regardless of all that the first one really is a kick-ass action movie. Part 3, unfortunately, doubles-down on the cosmic-justice lady-punishing while simultaneously dialing back the action and trading the straightforward simplicity of revenge/rescue plots for a boring riff on The Fugitive.

And yup - that indeed means that Famke Janssen's wife character is finally made to pay for still somehow not having divorced her useless rich-guy husband to go back to her bulletproof action-god ex by getting full-on murdered... and yes, it is indeed because useless rich-guy husband has gotten into it bad with some organized crime types who summarily frame Neeson for the crime. So now he's on the run in L.A. doing the Harrison Ford thing while poor Forrest Whitaker has to hover around doing the Tommy Lee Jones thing.

And yes, if you're noticing that this has seemingly nothing to do with the other Taken movies - not the same bad guys, no cool European location shooting, nobody got... y'know, "taken" - yeah, that's pretty much the case. This is just a low-rent Fugitive knock-off that just happens to re-use a handful of characters from Taken; which wasn't a series renowned for the depth and malleability of its characters in the first place.

The whole enterprise is pretty damn uninspired. You'd think that killing off the hero's wife to open the third movie in an action series would at least would draw at least a little bit of sympathy or, failing that, some "Women in Refridgerators" type outrage given that Janssen has maybe a handful of lines in Act 1 before her time in the franchise has come to an end. But there's so little effort on display it's impossible to really care about any of it. There's a running subplot about Maggie Grace as the now-grown daughter dealing with potentially becoming a parent herself too but, honestly, it feels like everyone from the previous films but Liam Neeson just showed up to be polite.

The action stuff is fairly generic - a fist-fight here, a shootout there, a chase scene, some sneaking around... none of it's very original or interesting. I'm sure these things come in nicely under-budget for producer Luc Besson, but at some point I think action fans need to demand more panache and imagination from a filmmaker who re-named himself "MEGATON."

None of which, of course, should come as a surprise to anybody. This is the third film in a popular franchise with a big star in the lead role - if it wasn't a complete waste of time, it wouldn't be coming out in fucking January.

<< Prev: The Interview - This Is What We're All Getting Worked Up Over?Next: Blackhat - Haxxor >>
Stay tuned on Fridays for new episodes of Escape to the Movies.
Related to:
bob chipmanescape to the moviesliam neesonmovies and tvreviewtakentaken 3
0
Tweet